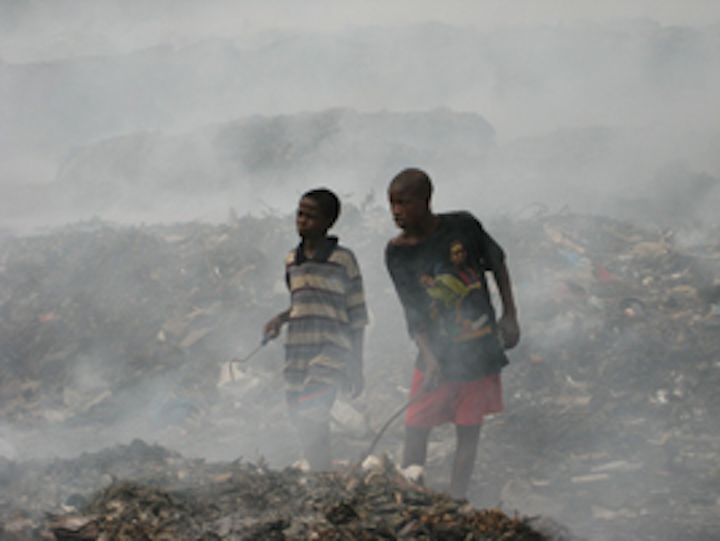 A worldwide assessment of municipal solid waste, “What a Waste: A Global Review of Solid Waste Management,” was released by the World Bank in March 2012, http://www.worldbank.org. With a focus on municipal solid waste (MSW) and its management in urban areas, the report is timely. Cities are now home to more than 50% of the world’s population, and this rate of urbanization is still increasing.

Waste characteristics– Globally, city residents (3 billion people) and commercial entities discard 1.3 billion tonnes (metric tons) of MSW per year, which equates to a daily generation rate of 3.6 million tonnes. Worldwide, the percentage of urban residents as a share of the global population is expected to increase to 70% to 80% in the coming decades leading to a growing amount of MSW to be managed.

Cities in wealthier countries, such as those in the Organization for Economic Cooperation and Development (34 countries in Asia and the Pacific region, Europe, North America-including Canada, Mexico, the United States, and South America), discard about half of the world’s urban waste (an average of 2.2 kg per capita per day). Conversely, the regions of East Asia, Africa, and South Asia have the lowest per capita generation rates at averages of 0.95, 0.65, and 0.45 kg per day, respectively.

As with MSW quantity, composition is influenced by the level of available income for goods and services. Local culture, climatic conditions, and such energy sources as the use of coal for cooking and heating that result in ash being discarded into the MSW stream also are strong influences of waste composition. With one component (organic discards such as food) as an example, the average share in MSW varies from a high 64% in low-income cities to an average low of 28% in high-income countries. Consumers in high-income cities tend to purchase more prepared foods, which results in fewer food-related discards (peels, pits, etc.) in meal preparation. These cities also tend to have refrigeration, minimizing food spoilage. Waste composition influences MSW management practices.

Collection frequency for organics should be more frequent in low-income cities or areas of cities, as the higher level of discarded organics in such urban areas poses a potential public health risk. Discarded organics can provide such food-source vectors as rodents and insects that might be carriers of diseases. As a minimum to break vector reproductive cycles, waste should be collected a minimum of fortnightly (although collection is usually more frequent for nuisance reasons).

Waste management– Waste collection should be provided on a regular and schedule for all residents in cities to reduce the potential for public health threats and to provide environmental protection from air (open burning of uncollected waste) and water pollution. Additionally, particularly in developing countries, uncollected waste can contribute to seasonal flooding by blocking drainage ditches. Cities in low-income countries tend to have collection rates below 50% of waste generation, while collection rates above 90% are common in cities in high-income countries. Some organic discards may be recovered by composting for gardens or used as feed for animals.

For the waste that is not recovered for recycling, the most common disposal method for collected waste in high-income countries such as Canada and the United States is landfill and waste-to-energy. Although the available data are less reliable, open dumps are the prevalent means of disposal in low to lower middle-income countries. Some disposal sites in middle-income cities that are designated as landfills should be classified as controlled dumps.

Waste and climate change– From an environmental perspective greenhouse gas (GHG) emissions are an emerging concern of MSW management, as it has been estimated to account for almost 5% (1,460 tonnes of carbon dioxide equivalent) of total global GHG emissions. Solid waste includes significant embodied GHG emissions incurred during the extraction and manufacturing of materials that become MSW.

Methane, a GHG, from landfills represents 12% of total worldwide methane emissions and landfills are responsible for almost half of methane emissions attributed to the municipal waste sector. Landfill methane varies by country, depending on waste composition and climatic conditions (temperature and precipitation) as well as waste practices.

Employment– With global waste discards amounting to 3.6 million tonnes per day, waste management services from collection and recycling (including the informal sector, “waste pickers,” who recover recyclable materials from waste containers prior to collection and at dump sites, especially in developing countries) to disposal require a substantial number of people with a range of skills. Waste management services have been estimated to account for 1% to 5% of urban employment both formal and informal.