Painstaking, But Without the Pain of Staking 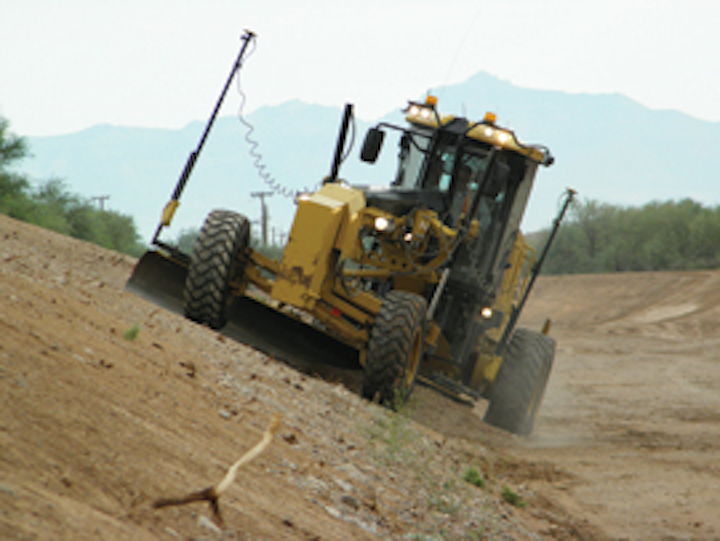 Landfill grading, and cross-slope grading in general, poses a unique challenge for automated grade control technology: that of holding grade by accounting for cross-slope dozer blade angle. A New York contractor that was awarded the contract to cap a landfill on Long Island, NY, recently employed an automated grade control system that suits cross-slope grading and maximized dirtmoving efficiency on a site that represented anything but an ordinary cut-and-fill project.

Capping the 28-acre Lincoln Avenue Landfill in Holbrook, NY, in adherence to current environmental regulations had been on the New York State Department of Environmental Conservation’s (NYSDEC) to-do list since 1986. Back then, the Town of Islip and the Islip Resource Recovery Agency (IRRA) entered into an order of consent with NYSDEC to develop a final closure plan for the landfill. As of 2012, the estimated cost was $16 million, including about $10 million for closure and capping and the remainder for post-closure maintenance and monitoring for 30 years. The scheduled completion of the capping project is November 2012.

Detailed recordkeeping of refuse dumping at landfills, as well as the implementation of recycling practices, emerged long after the Lincoln Avenue Landfill was active. For decades, many refuse items-now commonly separated from the wastestream and recycled-were commingled and dumped at the site. The objective of the capping project is to evenly grade the entire site and then provide a cover that is as impermeable to the elements as possible to prevent runoff from migrating through the refuse, getting contaminated, and reaching the groundwater. The site will also have a greenfield appearance and resemble a landfill as little as possible. “When you put a cap over it, it’s kind of like putting an umbrella over it so that when it rains, the water doesn’t go through it and into the ground,” says Robert Doutney, resident engineer/construction manager for Cashin Associates, PC, of Hauppage, NY, hired by IRRA to provide environmental engineering services.

For the company awarded the capping contract, Adam’s European Contracting, Brooklyn, NY, the haphazard dumping pattern made for a laborious process of moving about 300,000 cubic yards of material in grading the

landfill according to the final closure plan. For example, refuse such as broken concrete pavement, which is invariably crushed into recycled aggregate today, was dumped in various locations and had to be excavated for fill elsewhere on the site.

This was a new type of work for Adam’s European. “We’ve got the equipment, so we bid the job-it is basically an earthmoving job,” says Jacek Skarzynski, director of operations. On this project, Adam’s European would add yet another type of construction to a wide-ranging portfolio of work that includes masonry, roofing, excavation, concrete work, and marine construction. But not without a lot of help from the latest in automated grade control technology.

Additional Blade Control Dimension on Steep Slopes
In mid-January 2012, Adam’s European began its work, starting with clearing and grubbing-i.e., tearing out tree roots-for almost a month. By March, grading was well under way. In one spot, an excavator dug out chunks of broken concrete and placed them into a procession of dump trucks. Nearby, Don Horsfield pushed dirt uphill and stakelessly graded a large area using his Komatsu D61PX-15 equipped with a 3D-MC2 automatic grade control system from Topcon Positioning Systems. On the other side of the site, Gary Spotswood graded a 3:1 slope with a Komatsu D65PX-17, also equipped with a 3D-MC2 system.

The 3D-MC2 system is an evolution of the machine-control concept that increases speed. System components include an MC-R3 GNSS controller that works in conjunction with an MC2 sensor that replaces a slope sensor; a four-color, touchscreen, Bluetooth-capable GX-60 control box; and a conventional GNSS antenna mounted on the dozer blade. The MC2 sensor combines a gyro, compass and inertial sensor to measure the X, Y, and Z position as well as the roll, pitch, yaw and acceleration of the dozer. The technology gives the system the capability to provide blade position readings up to 100 times per second-or roughly five times as many as conventional systems. Additionally, testing indicates that the system yields about three times the grading smoothness of other machine-control systems.

Twin antennas mounted on a pole in the middle of the blade of Horsfield’s dozer provided Adam’s European with a key technological-and ultimately financial-boost on this project. On projects with numerous 3:1 steep 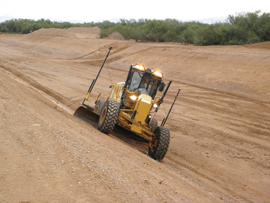 slopes like this one, use of the twin antenna maintains the efficiency of the 3D-MC2 system on cross-slopes, according to Jim Cleary of Adam’s European’s Topcon dealer, Cleary Machinery, IN South Bound Brook, NJ.

Use of the twin-antenna 3D-MC2 system provides control of a dozer blade in an additional dimension versus a single antenna.

This level of control particularly boosts productivity when an operator is grading steep cross-slopes and trying to hold grade on an uneven surface. The twin-antenna 3D-MC2 system accurately positions both ends of the blade to make this possible.

In some situations, the operator can take advantage of fully automatic, high-speed grade control rather than having to slow down the machine in that situation. In “full auto,” Topcon 3D-MC software takes over the machine’s lift and tilt cylinders, allowing the operator to grade with one hand on the left handle, while leaving the right hand to angle the blade. When necessary, the operator switches back to manual operation and regains full control of all movements of the dozer blade.

The marketplace also offers dual-antenna grading systems-i.e., antennas are mounted on both sides of the blade in contrast to Topcon’s two-antennas-mounted-on-one-pole configuration-that measure blade angle, but without the benefit of high-speed grading.

Another advantage of the twin-antenna 3D-MC2 system is that of more instantaneous holding of grade when the machine switches from forward to reverse operation, and vice versa, compared with single-antenna systems. This capability is particularly beneficial when dozers are working in tight spaces.

No Stakes Required
Once the site was graded to specifications, Adam’s European planned to put down a geocomposite gas-venting layer, which allows the methane gas trapped beneath the surface to travel to the gas vents. Next, a polyethylene geomembrane liner was to be installed that would waterproof the gas venting layer and allow drainage without erosion. Another layer would also be installed, consisting of drainage geocomposite that acts like a flat pipe to collect water from the top of the polyethylene geomembrane liner and direct it to the new drainage system. A 1.5-foot layer of silty soil, i.e., barrier protection soil, was to be placed on top of the drainage geocomposite. A 6-inch layer of topsoil was also to be used on top of the cap and this top layer was to be hydroseeded to prevent erosion.

Adam’s European was contracted to cut some areas of the landfill and use the material as fill elsewhere in the process of reshaping the site to the specified grades. The process was much more painstaking than a garden-variety dirt grading project, though, for two reasons. First, trash compacts more but is less homogenous than most types of dirt. Second, the landfill contains many tons of broken concrete; that material cannot be pushed with a dozer but must be picked out piece by piece with excavators and moved to fill areas with dump trucks. It was not a typical excavation project in which dozer operators make long passes and keep their machines moving almost constantly. This was more painstaking.

There was nothing that Adam’s European could do about the relatively slow process of moving material around the site, but its use of the 3D-MC2 system allowed the company to recoup significant efficiency in terms of staking-or, more to the point, the lack thereof.

Mesh Consulting, of Limerick, PA, had built a two-dimensional CAD file from the official survey and a second file indicating the trash in the landfill. For both files, Mesh converted the lines in the digital file into three-dimensional lines and then added contour lines. Mesh then converted the files from CAD to Topcon-3D Office, saving linework as an LN.3 file and the 3-D surface as a TN.3 file. The files were then loaded into the 3D-MC2 systems in Adam’s European’s two dozers. By using two separate files for finished grade and trash, the contractor eliminated the need to drive stakes in the ground-and a significant number of them would have been necessary, given major variations every few feet in the existing grade.

Out on one corner of the site, Cleary points at the Topcon GX-60 monitor in Horsfield’s dozer. Contour lines located every 2 feet were plainly visible on the monitor. He calls up a menu indicating the grade tolerance setting. 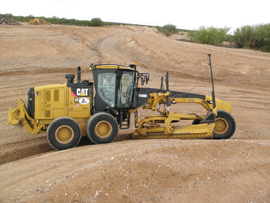 Cleary points out that, because trash is more difficult to hold within a tight tolerance than dirt is, the tolerance was set at three-tenths of a foot. Horsfield raises and lowers the blade as he moves around the area, holding the grade a foot below the specified elevation. From time to time, the readout informs him that the grade is either above or below the specification, and by what fraction of a foot. He adjusts the blade to the proper elevation in real time.

Only Cost-Effective Method
“I don’t see another way to do the job,” Skarzynski says of using high-speed automated grade control. “I cannot imagine how you could establish all of these slopes without machine control.”

Cleary adds, “Because of the challenges of the garbage, instead of grade stakes they’d probably bang big pins into the ground. The stakeout hardware would be more expensive than wood stakes, although you’d stake this site the exact same way with a grid of stakes.”

“Then you’d have to have stringlines, and you’d have to bring a surveyor out every day,” Skarzynski interjects. “It would cost a lot more money,” Cleary concludes.