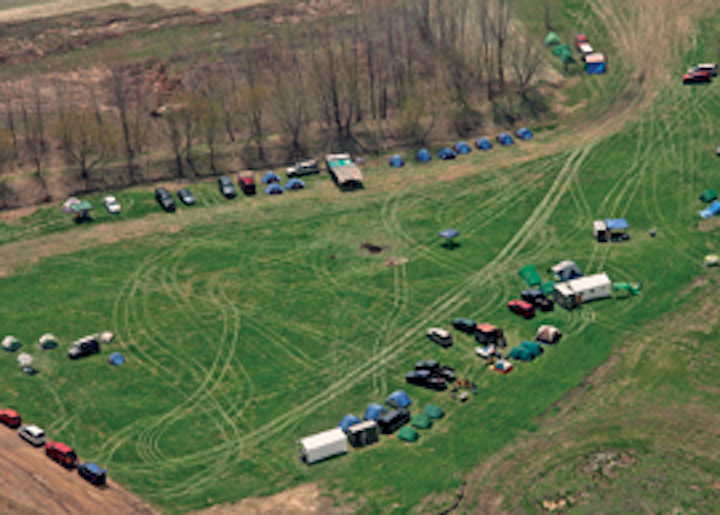 When folks in a five-county area that straddles the border between Wisconsin and Minnesota discard their food, drinks, paper, waterlogged books, bone-dry packaging materials-OK, everything not destined for their recycling bins-the refuse all ends up on Hank Koch’s professional doorstep.

And he’s more than willing to invite people inside, to a place filled with stuff they’d never expected to see again.

“A landfill isn’t a hole in the ground that has rats running all around in garbage,” he’ll tell you, sitting in his office at the La Crosse County Landfill in Wisconsin. “It’s an engineering facility. We want people to view us. We want people to see what we’re doing.”

So perhaps it’s no surprise that for a recent weekend, the 350-acre complex midway between Minneapolis and Milwaukee would welcome more than 150 guests to visit, explore and camp out where about 80,000 tons of garbage ends up each year.

Partnerships have a way of generating such commitment.

Whether it’s the Boy Scouts gathering for a weekend camporee, outdoors enthusiasts looking for new trails to blaze, logging companies thankful for more wood to harvest, or a health system turning a wasted byproduct into a valuable energy source, the solid waste program Koch oversees is busy cultivating a collection of interested parties intent on making the most of a resource that elsewhere might be considered an afterthought, even a blight.

By working together with seemingly anyone and everyone, La Crosse County is building a foundation of reciprocal goodwill strong enough to support both present-day needs and long-term goals.

“The more people understand this place, the more they appreciate it, the more they come to support you,” says Koch, the county’s solid waste director. “Long after we’re done landfilling, this property will have tremendous value to the community. And rather than having the community wait another 30 years until we’re done, we can have concurrent recreation and concurrent use.”

The relationships formed throughout such efforts are allowing a promising future to take shape now, with a clear direction shaped by a series of smaller projects already under way. As Koch and his crew continue to manage fill operations on 50 acres at the site, methane gas being released is captured for conversion into heat and electricity. On the remaining 300 acres, trees are sustainably harvested to support local industry, making way for camping, hiking and the general enjoyment of the community at large.

Such incremental efforts, fueled by mutually beneficial partnerships, will be expected to result in an enduring community resource that won’t require additional investments from the public once landfill operations are complete.

“We’re starting it now, and working a little bit at a time,” says Koch, who’s been in the landfill business for 40 years. “When we get to the end of this site they’ll say, “˜Wow, we have a park.’ At the end of all this, our park will be complete.”

Among the effort’s biggest supporters is a health-oriented neighbor.

In 2010 the two parties started working together to meet each other’s needs. The health system, seeking sources of renewable energy, started reviewing options near its expansive operation, which today encompasses more than 50 clinics and is affiliated with three hospitals and four nursing homes serving patients and clients in Iowa, Minnesota, and Wisconsin. La Crosse County welcomed proposals for using methane gas being released-and flared-at the landfill.

After studies, negotiations, regulatory reviews and utility consultations, the health system and county came together with a coordinated plan.

The county would upgrade its collection system and install equipment to collect, cool, and send its 300-cubic-feet-per-minute stream of landfill gas under and across Interstate 90, to a meter on the Gundersen campus.

Gundersen would install and operate a system for its Onalaska campus, a site with 350,000 square feet of clinical space and support offices 1.5 miles from the landfill. The system, designed by Burns & McDonnell, includes a Jenbacher JMC 416 reciprocating engine that does more than generate electricity-its heat is captured and used to heat the buildings and hot water for the entire campus.

The county gets paid for its gas. Gundersen meets all of its own energy needs. Electricity is sold directly to the grid, offsetting electricity used on campus and providing surplus power for others.

The project went online in March 2012 and is on track to recover its initial investment within eight years, then return dividends-both financial and environmental-well into the future.

“This gas will be there for another 40-plus years,” says Jeff Rich, executive director for the Envision program. “We may as well use it.”

While the partnership isn’t the first for Gundersen-the system has worked with both dairy farmers and brewers to capture methane gas for energy-the arrangement project has proven to be a true pioneer, Rich says. The project earned recognition as a 2012 Project of the Year from the EPA’s Landfill Methane Outreach Program, and Gundersen regards its Onalaska campus as the first known health campus in the United States to become entirely energy independent.

“This just shows what public-private partnerships can do,” said Corey Zarecki, Envision’s director of engineering and operations.

Enduring Relationships
At the landfill, Koch still marvels at how well the arrangement has worked. His department receives at least $15,000 a month from its collection and delivery of methane gas, a landfill byproduct that until last year simply had been burned off as waste by a system that had cost money to run.

“We’re looking at making many hundreds of thousands of dollars,” Koch says.

Other relationships also are paying off. As the landfill continues operating, the Outdoor Recreation Alliance clears trails on buffer land for mountain biking and cross-country skiing. Trail locations are coordinated with the landfill’s sustainable logging operations, which send walnut, red oak, and other wood varieties to nearby businesses for use in furniture, railroad ties, and other products.

Even camping Boy Scouts leave the landfill complex better off than when they arrive. Last year seven bluebird houses went up as part of an Eagle Scout project, and recent campers managed to clear $274 worth of metal from an old farm home in the woods-money then deposited with the regional Boy Scouts council as thanks for a job well done.

Such relationships are only the beginning for Koch and his colleagues and partners in the region. They’re looking forward to more operations, organizations and others-in the La Crosse area and beyond-banding together in the same spirit of mutual cooperation that’s already building success at the 350-acre complex.

“We’re not creating anything new,” says Nick Nichols, the county’s sustainability director. “We’re just taking a lot of cool ideas and putting them into place. This is not rocket science. It’s just being visionary, using what’s in our own backyard and preserving it for future generations.”