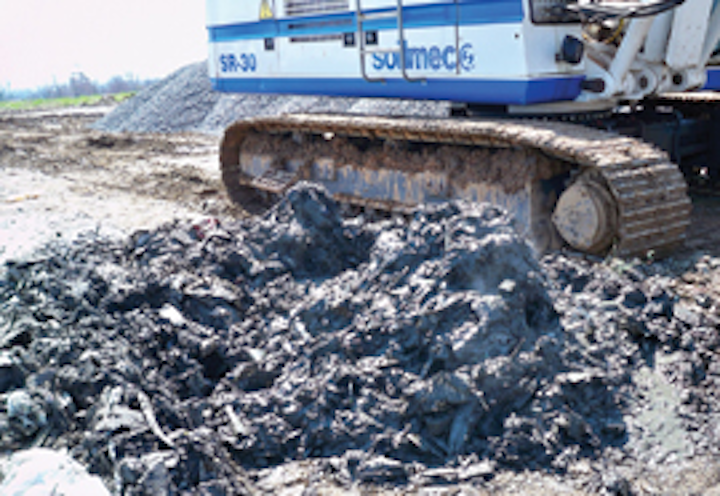 Landfill gas extraction efficiency from an MSW landfill was declining precipitously due to waste-derived fluid incursion into the gas extraction wells. The reduced methane harvest resulted in a financial hardship for the contracted vendor and lowered revenues for the landfill owner (a municipal authority).

The 35-acre, 760-tons-per-day, central Virginia MSW landfill also accepts stabilized municipal wastewater sludge as a significant revenue source. The waste-to-sludge ratio is approximately 8 to 1, with the sludge physically mixed with MSW on the workface. Figure 1 illustrates freshly excavated waste from a gas vent installation. Note the wet appearance of the waste, which was 129°F after excavation. The moist waste promotes microbial decay and methane formation. Methane content of the landfill gas is high (30% to 50%). However, the waste-derived fluid readily accumulates in the vents and severely restricts gas extraction efficiency.

In an effort to mitigate diminishing gas extraction, the vendor began to systematically dewater various gas vents using a portable generator and electric submersible pump. Produced fluids were discharged into the landfill gas condensate collection system, which flowed to the landfill leachate collection system. The vendor noted that after several rotations of the mobile dewatering system, the gas vents would be fully dewatered, but refill within approximately 72 hours. The vendor requested assistance from the landfill owner to evaluate alternatives to dewater the waste unit in order to enhance gas extraction efficiency. The landfill owner was also interested in mitigating the frequent leachate outbreaks on the waste surface, and mitigating odors.

The gas extraction vendor observed retrograde gas extraction efficiency and gas vents filling with fluid. The landfill owner was continually mitigating leachate outbreaks on the landfill surface and in waste excavations. After repeated attempts to dewater the gas vents and redirect fluid outbreaks, the landfill owner requested an engineering evaluation and recommendations for more effective means to address waste fluid. 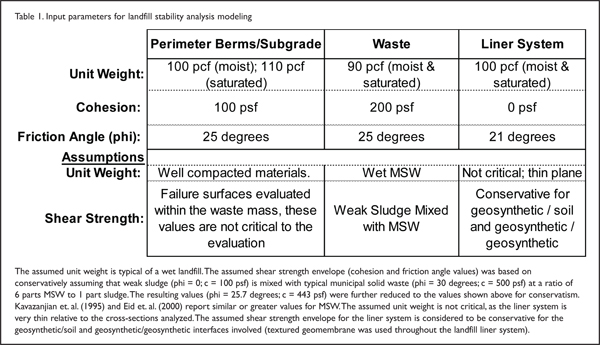 We completed slope stability analyses under the assumption of saturated waste conditions, and we evaluated the integrity of the leachate collection system to convey fluid from the waste mass. In order to calibrate the stability analysis, we completed an investigation of in-situ waste characteristics, primarily pore pressures at depth within the waste.

Method
We evaluated the leachate collection system to determine if some degree of failure led to reduced fluid conveyance. Due to the leachate collection piping configuration, a camera inspection could not be performed. However, measured leachate flow rates ranged from 4 and 20 gpm (165 to 825 gallons per acre per seven days), a range generally in accordance with design criteria.

Landfill waste mass stability was simulated using STBLEPC along two critical planes. These critical planes were determined from combinations of waste thickness, base slopes, and limited perimeter berm (resisting structure) height. The initial slope stability analysis assumed that a phreatic surface had formed in the waste. The model evaluated potential failure along the landfill liner (block failure; modified Janbu method) and through the waste mass (circular failure; modified Bishop method) under both static and seismic conditions. Table 1 summarizes the input parameters for the stability analysis along the two critical cross-sections and the results of the initial stability analysis, indicating potential failure of the waste mass if pore pressure was, in fact, elevated.

The assumption of a phreatic surface within the waste resulted in a factor of safety close to 1.0 for both existing and future conditions and considering circular failure surfaces. The reason for the low factor of safety is that the shear strength of the waste is related to the amount of normal force acting on the waste as well as the strength parameters of the waste (friction angle and cohesion): t = (s — u)tanw + c, where t = shear strength (psf), s = applied normal load (or stress) (psf), u = pore pressure (psf), w = friction angle (degrees), and c = cohesion/adhesion (psf). Per the equation, as pore pressure (u) increases, the effective normal stress is reduced and, thus, shear strength is also reduced.

With the possibility of a low factor of safety against sliding within the waste mass, we recommended that efforts be made to verify whether or not there was a phreatic surface within the waste mass. This information would also assist in designing a dewatering program to enhance gas extraction efficiency. A cone penetrometer test (CPT) was performed by In-Situ Soil Testing LC (Roger Failmezger, P.E.) to evaluate pore pressures at depth within the waste mass at points along the critical cross sections. CPT is a typical procedure for investigating many different parameters in situ within unconsolidated earth material and fill. A full description of CPT applications is beyond the scope of this paper. For the project described herein, only pore fluid pressure measurements were of critical importance. Temperature profile with depth in the waste unit was of secondary interest.

Results
Six CPT locations were chosen along critical cross-sections. The proposed CPT locations were surveyed to 0.01-foot precision, and depth of waste from the surface was determined (to prevent driving the CPT through the leachate collection system and liner). The CPT rig was located at six staked probe locations and the landfill probed either to planned depths or to the point where excessive resistance was encountered.

The thin, discrete fluid zones within the waste do not hydraulically communicate vertically, as indicated by pore pressure returning to the zero baseline after each thin layer is penetrated. Hydraulic conductivity of a representative fluid zone was measured on the order of 10 to 9 cm per second using the CPT instruments.

The observations suggest that pore fluids slowly migrate horizontally along the layers or lenses but that a vertically contiguous phreatic surface has not formed. It is envisioned that the low-pressure environment induced in the waste mass by the landfill gas vents allows a substantial amount of fluid to weep or otherwise migrate into the well from the lateral fluid zones.

A second CPT investigation for fluid distribution in another landfill located in southwest Virginia was conducted to support a landfill dewatering plan to increase gas extraction efficiency. The second CPT study demonstrated very similar pore fluid distributions as compared to the first CPT evaluation. This observation suggests that wet MSW landfills will tend to have laterally continuous layers or lenses of low-permeability saturated zones, but not necessarily a phreatic surface.

Based on the pore fluid pressure results from the CPT work, a calibrated slope stability analysis was completed for the landfill assuming no phreatic surface conditions, which resulted in acceptable factors of safety for landfill stability under static and seismic conditions. With the concern somewhat diminished regarding the potential for incipient landfill failure, recommendations for landfill dewatering to support landfill gas extraction were then provided to the owner.

While landfill stability appears to be adequate, wet conditions will continue to be a problem for operations regarding leachate outbreaks, odor, and reduced efficiency of gas extraction. The low hydraulic conductivity of the horizontally sequestered saturated zones will limit the efficiency at which the waste mass can be dewatered. The following recommendations were made: