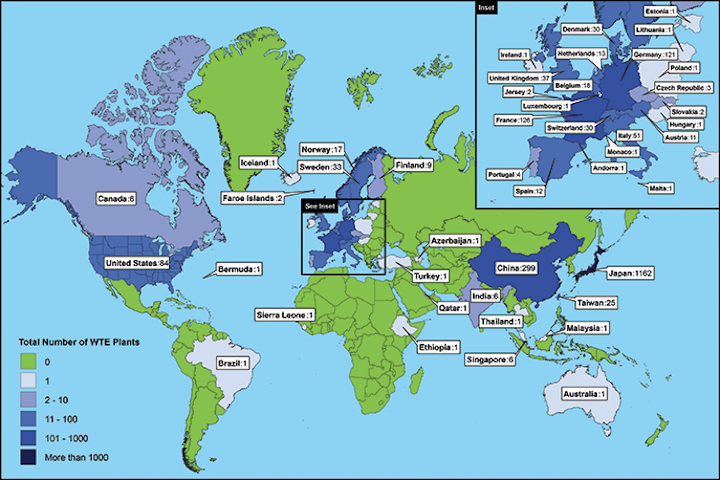 Over the past several decades, various non-governmental organizations (NGOs) such as the Asian Development Bank, United Nations, World Bank, and international research agencies supported by various European nations have estimated that solid waste, which is generated worldwide, is estimated to be approximately 1.3 billion metric tons per year and expected to increase to approximately 2.2 billion metric tons by 2025. This assumes an increase in per capita waste generation rates from 1.2 to 1.42 kilograms per person per day over the next decade (Table 1.1).

MSW generation rates are influenced by several key factors; among these are economic development, degree of industrialization, urbanization, and climate. Data collected by international organizations such as the World Bank and the United Nations suggest that the higher the degree of economic development and urbanization, the greater the amount of solid waste produced. Further, income level (gross domestic product or GNP) and urbanization are usually correlated as well as disposable incomes and living standards. As the levels of these factors increase, there is a corresponding increase in the generation of solid waste, with urban residents generating almost twice as much solid waste as rural inhabitants. Waste reduction efforts are anticipated to produce a leveling of peak waste in OECD countries by 2050, East Asia and Pacific countries by 2075, and continued growth of waste in Sub-Saharan Africa. Global waste generation is projected to possibly hit 11 million metric tons per day by 2100.

How to dispose of the cans, cereal boxes, newspapers, tires, bottles, and other castoffs of communities in the industrialized and the developing world in an environmentally sound and economically efficient way has become a problem of critical proportions. Up until the recent past, resources were considered as something scarce, which needed to be reused with little, if any, going to waste. To assist in this effort, the “ragmen” and piggeries could be found in most urban areas of the industrialized countries and formed the basis of an active recycling industry.

With population growth and waste generation rates spiraling upward, many communities worldwide are beginning to search for alternative long-term solutions to the methods they once employed to dispose of their solid wastes. Sanitary landfilling of solid waste has become the traditional approach for most communities in the industrialized world where it has progressed from an earlier era of dumps and open burning to its present state of engineered landfills.

Sanitary landfills can be designed today to be an environmentally acceptable means of waste disposal, provided they are properly operated. New regulations regarding landfill liners, leachate control systems, landfill gas collection and control systems, and long-term closure requirements, however, have dramatically increased the cost of landfilling. In addition, suitable land for landfill sites close to nearby urbanizing areas is now less available for many communities, thereby resulting in communities having to locate more distant landfills. The Not-In-My-Back-Yard (NIMBY) attitude on the part of citizen opposition groups, however, has increased the difficulty of many communities in the siting and permitting of these new landfills.

Consequently, as existing landfill capacity has been reduced, there has been an increased interest in the concept of recovering energy and recyclable materials from MSW rather than relying on sanitary landfilling as the primary long-term method of solid waste disposal. Further, the European Union (EU) goal to reduce landfilling by 65% of biodegradable MSW and the EU Directives on Waste Incineration and on Landfilling have prompted new construction of WTE plants and upgrading of existing plants to meet EU Directives.

Figure 1.2 graphically shows the state of recycling or composting, WTE, and landfilling of MSW in each EU member state, in addition to Iceland. Norway, and Switzerland. As of 2015, Germany was the leading nation for recycling, with 68% of MSW either being recycled or composted. Further, seven-member states landfill less than 10% of their MSW, which is the target goal by the EU in its Circular Economy Package by 2030. However, eight member states still landfill more than 60% of their MSW, suggesting a continuing market for recycling/composting/WTE.

The Trends Towards Energy From Waste
Producing and utilizing energy from the combustion of solid waste is a concept which has been practiced in Europe since the turn of the last century. Prompted by a concern for groundwater quality as well as the scarcity of land for 1andfilling, many European countries, along with Japan, embarked on massive construction programs for WTE programs in the 1960s.

United States
Transfer of this technology to the US first began in the late 1960s and early 1970s. In addition, many other projects utilizing American technology in shredded and prepared fuels were constructed. Most of these projects were problematic, however, because they were unable to overcome materials handling and boiler operations problems. It was these failures that made local government leaders initially cautious in funding construction of WTE projects.

Nevertheless, several WTE projects were developed in the mid- to late-1970s in communities such as Saugus, MA; Pinellas County, FL; and Ames, IA, which was experiencing severe landfill problems. The success of these projects helped the WTE industry gain acceptance by local government leaders and by the financial community. Tax incentives made available by the federal government for WTE projects attracted private capital investment in such projects assisting in the maturing of this industry in the US and sparked the development of many new projects.

During the 1990s, the WTE industry in the US experienced several setbacks, which resulted in no new WTE facilities being constructed from 1995 through 2014. Expiration of tax incentives, significant public opposition in facility siting, and the US Supreme Court decision in Carbone dealing with solid waste flow control forced many communities in the US to opt for long-haul transport of their solid waste to less costly regional landfills. A more recent Supreme Court decision on flow control has restored the ability of communities to enact flow control ordinances and enable them to direct their wastes to WTE facilities. As a result, some WTE facilities have recently begun to expand by adding new processing lines to their existing operations. These facilities are basing their requests for financing and permitting on their successful records of operation and environmental compliance. In 2014, the first new WTE facility since 1995 was constructed by the Solid Waste Authority (SWA) of Palm Beach County, FL. The SWA’s Renewable Energy Facility 2 (REF2) is a $672,000,000, state-of-the-art WTE facility. The REF2 project is the first of its kind in more than 15 years and is the most advanced and cleanest waste-to-energy power plant in North America.

As of this writing, there are currently 87 WTE plants operating in 25 US states managing about 7% of the nation’s MSW, or about 90,000 tons per day. This is the equivalent of a baseload electrical generation capacity of approximately 2,700 megawatts to meet the power needs of more than two million homes while servicing the waste disposal needs of more than 35 million people.

Europe
Europe is the largest and most enhanced market for WTE facilities. Large numbers (Figure 1.1) are in Europe, primarily because of the EU Circular Economy Package adopted in January 2018 that requires a 65% reduction in the landfilling of biodegradable MSW by 2030 with a binding landfill target to reduce landfill to a maximum of 10% of MSW. Nonetheless, a large part of the EU’s wastestream (40%) is still landfilled. These WTE plants converted about 69 million metric tons of MSW (or about 20% of the EU wastestream) generating 30 TWh of electricity and 55 TWh of heat. This is roughly equivalent to supplying the annual needs of 13 million inhabitants with electricity and 12 million inhabitants with heat in these countries. Given the EU’s directive on landfilling, estimates of new WTE facility construction range from 60 to 80 new plants by 2020. Scandinavian counties (Denmark and Sweden) have historically been significant proponents of WTE.

China
Economic development and rapid urbanization in China over the past few decades has resulted in a rapid generation of 200 million tons of MSW requiring disposal in 2016. Currently, one of the largest markets for WTE plant construction is in China. According to the World Bank, China surpassed the US as the largest generator of MSW in 2004. This has produced an unprecedented trash crisis in many of its cities. Due to a deficiency of land for continued landfilling of MSW, China has embarked on a major construction program of WTE facilities.

The Chinese WTE capacity has increased steadily from 14 million tons in 2007 to nearly 75 million tons by 2016, although landfilling remains the dominant means of waste disposal in China. Since the beginning of the 21st century, China has become the fourth largest user of waste-to-energy (WTE), after the EU, Japan, and the US, with most plants located in the heavily industrialized cities in southeastern China. 259 WTE mass-burn plants have been built in China as of 2016 with a total capacity of 280,000 TPD, according to The China Municipal Solid Waste Industry Development Report by China Association of Urban Environmental Sanitation & China Urban Construction Research Institute Co. LTD. Early WTE plant designers experimented with CFB (Circulating Fluidized Bed technology used in 58 plants as of 2016) and locally-made grate technologies that resulted in low plant utilization factor. Despite the relatively high capital cost of WTE, the central government of China has been very proactive regarding increasing WTE capacity. One of the measures brought in provided a credit of about $30 per MWh of electricity generated by means of WTE rather than by using fossil fuel.

As China pushes WTE technology, there have been protests over the siting of these facilities from local citizens who are fearful that they emit toxic air pollutants. Over the past few years, protests have taken place in major provinces such as Hainan, Hubei, Hunan, Guangdong, Jiangxi, Shandong, and Zhejiang. Siting concerns persist despite assurances from project developers and city administrators.

Africa
The Koshe dump site has been the only landfill in Addis Ababa since the 1960s. As the city has expanded, the landfill, which used to lie in the rural areas on the outskirts of the Ethiopian capital, has become part of the urban landscape, sprawling over an area the size of 36 football fields and attracting hundreds of waste pickers who make their living from salvaged trash. In 2017, a landslide on the dump site killed 114 people, prompting the government to declare three days of mourning.

A new WTE plant is set to transform the site and revolutionize the entire city’s approach to dealing with waste. The plant, which is due to begin operating in 2019, will incinerate 1,400 tons of waste every day, which is roughly 80% of the city’s MSW. Further, the plant supplies greater Addis Abba with 30% of its household electricity needs and meeting EU standards on air emissions.

Numbers of WTE Facilities
As of the writing of this article, there are about 2,179 WTE facilities worldwide (Figure 1.2). Asian countries (Japan, Taiwan, Singapore, and China) have the largest number of WTE facilities worldwide. All these countries face limited open space issues for the siting of landfills and high urban populations. For example, Japan has addressed its solid waste issue by processing about an estimated 70% of MSW in WTE facilities.

7. Manders, Jan., Developments on Waste to Energy Across Europe, Presentation to WTERT, October 8, 2010.