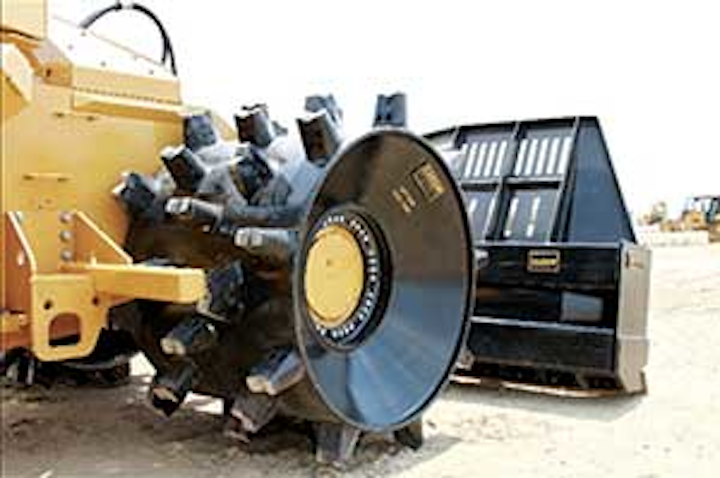 Landfill compactors are a standard tool for the industry. Virtually every landfill is expected to have one. But like that gym treadmill collecting dust in the spare bedroom, too often landfills have a compactor and then too quickly seem to forget why they got one in the first place.

The basic idea is to compact trash to maximize airspace and revenue. The goal is to have a machine with big teeth—lots of them—and then to operate that machine in such a manner to put the most holes into the waste.

To accomplish this, we allow the compactor to work flat and provide a wide enough active face so the compactor spends most of its time moving at top speed (albeit only about 3 miles per hour) and less of its time slowing down and then re-accelerating at the end of each pass. We want to use support equipment like the dozer to do the heavy lifting of pushing and spreading and let the compactor do the work of compacting the trash.

Simple concept, really, but like that old treadmill gathering dust, after a while, we forget why we got it in the first place. We just go through the motions and we just don’t think that much about it.

When we do think about our landfill compactor—and more specifically about the compactor’s teeth—we are thinking more about making those teeth last as long as possible to defer the cost of replacement. Our focus becomes much more directed toward pinching pennies on the maintenance and repair side than on getting out there with that machine and pounding the heck out of the waste so we can maximize our density.

Sort of reminds me of that scene in one of the Rocky films where Rocky is an old fighter and he is going up against some young, quick fighter. Rocky’s coach tells him, “Hey, you are going up against a guy that is younger and quicker, so your only chance is to win with brute force.” This is not to say that there is not some value to finesse and technique when it comes to landfill compaction, but in the end, it really comes down to putting as many big teeth in the trash as possible during the compactor’s work day.

Let’s do a little value engineering on the process of landfill compaction, specifically on the value of having big, aggressive teeth on the compactor.

This of course brings us to that critical question: “When do they need to be replaced?”

How Did This Start?
Thirty or more years ago, the landfill industry was very focused on obtaining compactor teeth that were as aggressive and effective as possible. But over the last couple of decades, the landfill industry has been on a quest to reduce costs wherever possible, and there has been a push for manufacturers of landfill wheels and teeth to offer longer and longer warranty periods.

More than 30 years ago, I was involved in a side-by-side compaction test between two Caterpillar 826C compactors, one equipped with the CAT Chopper teeth and the other equipped with Caron’s innovative pin-on teeth. Through nearly a week of compacting, monitoring, surveying, and calculating, we determined that Caron’s pin-on teeth achieved approximately 5% greater density than Caterpillar Chopper teeth.

If you think 5% is not significant, just pull out your calculator, multiply your remaining airspace times a conservative 1,300 pounds per cubic yard. Divide that by 2,000 to convert to tons, and then multiply that great big number times your landfill’s gate rate—whatever you charge per ton for inbound waste. When you get that humongous number, multiply that times .05 or 5%, and see if that 5% variance doesn’t get your attention.

Here’s an example:
A landfill has 4,000,000 cubic yards of remaining airspace. It is achieving an effective density of 1,300 pounds per cubic yard (AUF = 0.65). The gate rate is $50 per ton. Accordingly, the landfill could receive $130 million in gross revenue.

A 5% variance here is worth $6.5 million. If we wanted to call this a sensitivity analysis, revenue would be very sensitive to variation in waste density.

Yes, I know this is very simplistic, but the point is that waste density impacts the landfill in a big way.

Now, let’s look at how the variation between new teeth and old teeth plays out—from both a performance and cost perspective.

Let’s Crunch Some Numbers
To start this process, we need to do a field density test at a landfill during which we measure actual density achieved by a compactor. In fact, we need to conduct two density tests: one with new teeth and one with worn out teeth. It’s those two data points that allow us to calculate the optimum time for tooth replacement.

In that regard, this test can most effectively be conducted at a landfill that is due to have new teeth put on their compactor. In that scenario, the first density test would be conducted with the old, worn-out teeth at right about the same time they are going to be replaced.

It’s important to compare apples to apples. The test cell and tonnage, including the tons/hour that the compactor handles, need to be consistent from one test to the next. Keep in mind that calculating this—something called the optimum production rate for your compactor—is a whole other process, so we will just look at some general ranges. While I recognize that there are many different makes of compactors, I’ll just express this as three different types using Caterpillar’s three different models of compactors.

Keep in mind that these optimum production rates for these different sizes of machines can and do vary from site to site. But this will give you a reasonable point of comparison.

After running your two tests (one with old teeth, one with new), you’ll end up with two different density numbers.

This is just an example, so don’t make decisions for your landfill based on these numbers. You need to run your own tests—this scenario is for explanation only. 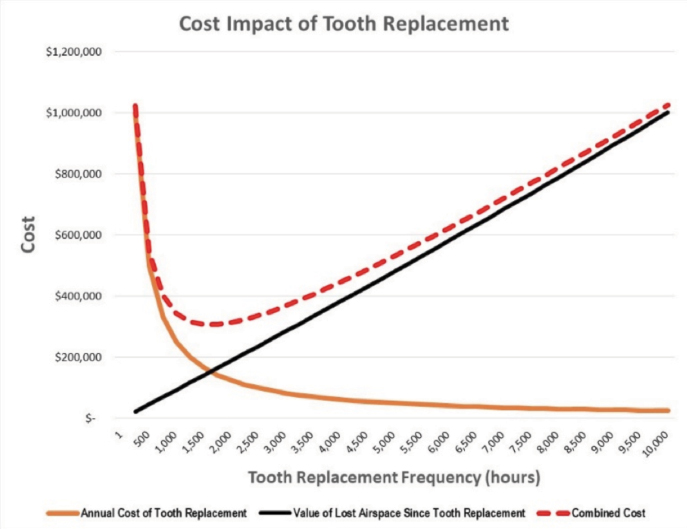 The old teeth will peg at a lower density than the new teeth. How much difference is there? Well, it will depend on the size of the compactor, the wastestream, the make of the teeth, the tooth configuration, and your operating technique. There will be a lot of variables, but if you keep those all constant from one test to the other, you’ll come up with two data points and those will clearly show that the new teeth achieve higher compaction than the worn-out teeth.

We utilize an Excel spreadsheet to perform this calculation. The spreadsheet will look at what your cost savings are by not replacing the teeth until they are completely worn out versus the value of airspace that’s consumed. 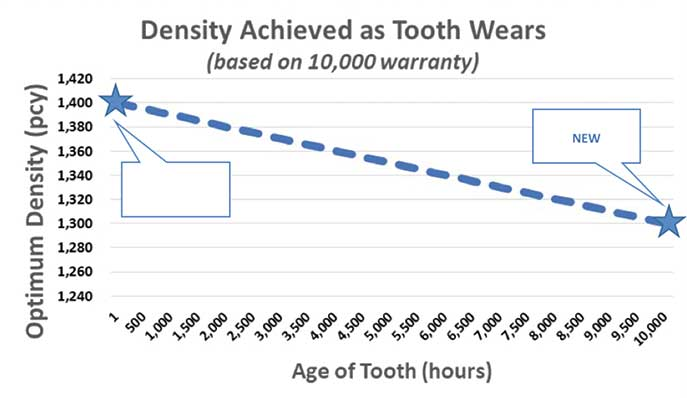 Now, since you only have two data points, I think it’s reasonable to assume that the effectiveness of those teeth decreases linearly as the teeth wear out. What you will see on this spreadsheet is that as the tooth replacement frequency increases—in this case in 500-hour increments—your tooth replacement costs will decrease. This is a simple amortization of a capital cost.

Conversely, the amount of money that you spend in airspace will increase as those teeth wear out. This is because as the teeth wear down, their ability to compact trash effectively decreases. In this case, this is a marginal cost—that is: it is the additional cost of lost airspace because you are running a compactor with worn teeth.

When you put all this together to show the combined cost, you will find that new teeth are so much more effective than worn teeth that you’ll want to throw your current tooth replacement schedule out the window. You will immediately realize that incredible value of airspace is so dominant in this analysis that a much more frequent tooth replacement schedule just makes sense.

How big a deal is this? Pretty darn.
In fact, if your analysis doesn’t show that you should cut your tooth replacement schedule in half, I’ll be surprised.

Now, let me qualify all of this by saying that every site is unique, and every type and size of compactor (and tooth) is different. So, different teeth will perform differently. Some tooth configurations will provide higher density than others. In general, we see greater densities with compactors that have big teeth and lots of them.

The point is, this is a watershed moment and landfills that get this point and actually change the way they operate will have a distinct advantage against those where the landfill compactor teeth are run into the ground.

For many years, I’ve heard people say, “You’ve got to spend money to make money.” I generally think that this is an extreme simplification of sound business practices. But when we are talking about compactor teeth replacement schedule, it’s absolutely true.

In fact, a good strategy might be to replace your teeth long before the traditional replacement time and just give those old teeth to your competitor…for free! Let them lose airspace—while you hammer yours all the way to the bank.

Over the years, we’ve done dozens and dozens of density tests at landfills. And the more we learn about waste compaction, the more we come to realize how critically important it is.

Autocar trucks brings back CLASSIC logo on its 100th birthday