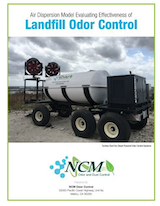 Landfill odor control has a big role in landfill operations and contributes to being a good neighbor. Most landfill facilities are required to have effective odor control systems to reduce odors and minimize the migration of odors to off-site locations.

Reporting is required for most landfill operating agreements. Our friends at NCM prepared this report to detail the effectiveness of an installation which consists of a combination of water-based misting and vapor odor control systems to neutralize fugitive odors at a California location.

In this report, the layout of the misting system to effectively cover the area is covered. Elevation and wind data is considered for the design of the misting system. Over the past 12 months, modifications were implemented, resulting in strong overall performance, which meets or exceeds the original design.

Download this report now to discover how the air dispersion model was used to evaluate the effectiveness of landfill odor control.