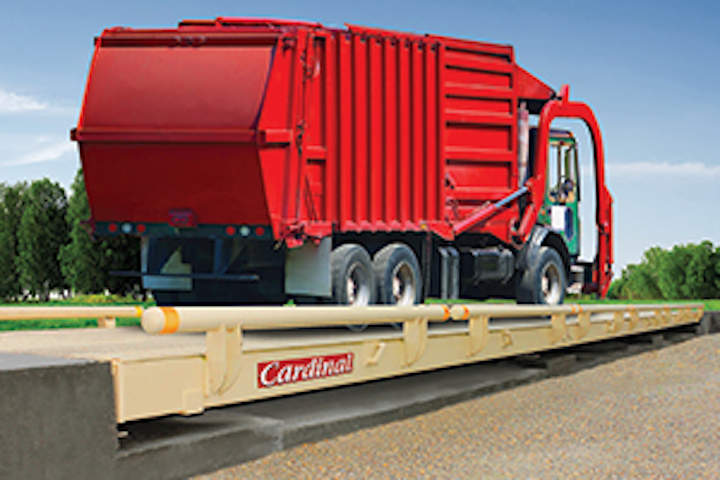 So what’s new with in-ground scales and the supporting software? In sum, the scales themselves are becoming more rugged and dependable, and the software is being programmed with a lot more features.

One company offering a wide range of scales is Mettler Toledo (MT). “We provide a number of different truck scales for multiple industries,” says Stuart Thomas, marketing manager, MMS and Vehicle SBU, for the company. “We sell a lot of different versions for the waste industry, depending on the applications.” Typically, for inbound and outbound scales at landfills, MT offers some standard models, which are appropriate for the over-the-road traffic.

The model that MT recommends depends on how much traffic a landfill sees each day. “If they are a small county landfill with low volume, such as 100 trucks a day or less, we offer either a steel or concrete driving surface scale,” he says.

As Thomas sees it, the main difference between MT scales and those of its competitors is the company’s load cell technology. “Most failures and downtime of scales these days are due to load cell problems and junction box failures,” he says.

A typical scale will have an average of 10 load cells underneath it that are measuring the force or weight. These cells tend to be wired together in one or two junction boxes. In many markets, according to Thomas, these load cells are a commodity, and a basic analog load cell can be quite inexpensive. However, it may fail every two or three years.

“Over the last couple of decades, we have developed a load cell technology that is designed not to fail,” says Thomas. “So, instead of being a replacement part for us, it is designed to be a permanent part.”

MT offers a digital load cell, called a POWERCELL PDX, which does not use a junction box. The cells are wired in a “daisy chain” fashion. Eliminating the junction box eliminates that source of failure.

“In addition, since we make the load cells impregnable to water, they are also extremely reliable,” he says. “We have had some customers using POWERCELL load cells for 15 or 20 years without having to replace any of them.”

One satisfied MT customer is the landfill of the McKenzie County Solid Waste Department (Arnegard, ND), which installed a VTC-221 80 x 11 scale in March 2013. “We could have selected a different vendor, but I had experience with MT scales from my time at the Ada County, Idaho, landfill,” says Richard W. Schreiber, director. “MT makes a rugged, heavy-duty product that stands up well to the abuse that waste trucks inflict. We needed an 80-foot scale to handle the long moving floor waste trailers that come here. This model is heavy duty and built very well. It’s ‘bulletproof.’”

According to Schreiber, the scale is basically a “set it/forget it” system, which is important for an operation like his. “I don’t have the time to spend, or the employees to task, with the maintenance of scales,” he says.

He reports “zero problems” with the scales. “We went from an unregulated, less than 20-ton-a-day facility to a fully regulated, Title 5, Subtitle D facility in the span of two years,” he says. “Now we are averaging 300 tons a day. The one thing I do not have to worry about are the scales, and that is huge for me. We have not had to switch back to cubic yards for measurement since the scales went operational.”

The scales allow the facility to quickly and efficiently get the trucks in and out. “We can run 15 trucks inbound per hour and get the same trucks out of the facility very efficiently. Time is money for the haulers, and we can keep the wheels rolling.”

However, with only one scale, it was not possible to get trucks into and out of the facility efficiently. “Most trucks need to weigh on their way out,” says Schreiber. “We do keep tare weights on some of the units, but we try to run everyone across the scale on the outbound.”

As a result, the facility decided to install a second scale—an outbound scale, when it realized that it had 12 trucks stacked up. “We already have the second 80-foot scale on the ground and ready to go,” he says. “Right now, we are waiting for the weather to warm up so we can run all of the electrical. Here in western North Dakota, the frost can go down seven feet, so trenching is not possible (this time of year).”