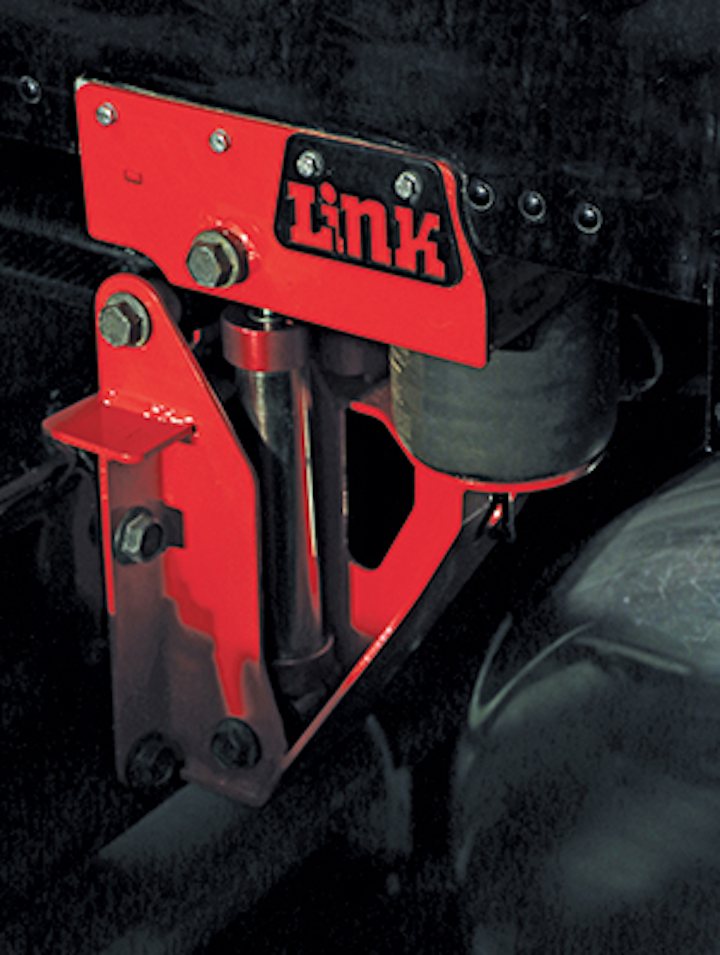 Negotiating On- and Off-Road Surfaces Consecutively Can Present Challenges.
A heavy-duty vehicle hauling solid waste travels down a paved road leading out of town. The ride is relatively smooth and unremarkable, but the driver has made this trip before, and he knows that things are about to get interesting. The vehicle makes its way off-road and onto the uneven terrain surrounding a municipal landfill. At this point, the vehicle still handles reasonably well, and under its full load, its heavy-duty springs and frame rails are performing precisely the way they were designed.

The vehicle is emptied and the driver begins his trek back toward the road, but as he had anticipated, now it’s as if he’s operating a completely different vehicle. The ruts and bumpy off-road landscape are shaking the cab, its contents, and its driver so vigorously that the truck has become difficult to operate, and so the driver has slowed to a crawl. It’s not the vehicle that has changed; it’s the characteristics of its finely tuned suspension––a suspension that was designed to perform optimally under a full load.

The above scenario occurs at landfills across North America and the inverse can happen when an empty vehicle travels off-road to pick up a load. As a result of a cab’s instability, structural damage can occur, safety is threatened, and productivity is diminished due to the driver having to reduce his speed.

The problem is so widespread and of such concern to the transportation industry globally that the International Organization for Standardization (ISO), issued a standard addressing it. According to the ISO 2631-1:1997 standard, prolonged exposure to dynamic forces such as those present in a truck cab while off-road can cause internal injury and thus may pose a health risk to any driver subjected to them.

Recognizing that cab instability can cause injury and loss of productivity, and even negatively impact driver retention, some OEMs and fleets have turned to the use of advanced seating technology. Long popular with independent owner-operators, seating with built-in suspension systems can increase driver comfort, particularly in the case of inadvertent rough spots. However, during more prolonged periods on challenging terrains, the entire cab, including steering wheels, gear shifters, accelerator, and brake pedals, is in motion, so the more stable driver is forced to contend with a dynamic environment that can still impede vehicle operation and safety. What’s more, seating technology does nothing to address the structural damage that is endemic among Class-8 tractors that routinely travel off-road.

Link Manufacturing’s Cabmate Semi-Active Cab Suspension was developed as a holistic solution that stabilizes the entire cab and its contents. With the system, human and material assets enjoy a significantly smoother ride and are shielded from the otherwise damaging physical forces they may encounter when venturing off-road.

Over 10 Years in the Making, Link’s Semi-Active Cab Suspension’s Time Has Come.
Link’s 1980 introduction of the system propelled it to widespread prominence and made it the recognized standard in premium cab suspension. The technology could be a game-changer with far-reaching benefits.

The company began exploratory efforts on the feasibility of developing semi-active cab suspension in 2006. Link’s development and refinement of the Cabmate had validated its engineering department’s assertion that a cab is simply a mass on springs, and that a vehicle’s factory suspension is already qualified to deal with a broad spectrum of road conditions. Link could therefore keep its focus narrowed on the mechanical forces being transferred from the frame rails to the cab.

As the engineers rolled up their sleeves, they were soon confronted with a dilemma. In 2006, the technology needed was either nonexistent or too expensive to lead to a viable production model of the envisioned suspension.

By 2014, advancements in all the requisite technologies made it feasible for Link to begin exploring its semi-active cab suspension again. Additionally, its engineers realized that they could program an electronic control unit (ECU) with their own proprietary software.

In its efforts to develop an optimal shock absorber, work began with suppliers to develop a shock absorber that would be exclusive to the Cabmate Suspension line. Both magnetorheological dampers and hydraulic actuation solutions are still being entertained, and performance and economics will ultimately dictate which technology prevails.

With prototypes still in the final testing phases, Link’s 38-year background in cab suspension testing is paying off. Certified to IATF 16949 standards (previously TS16949), Link’s in-house testing facility is uniquely qualified to put the new suspension system through its paces.

How the New Cabmate Semi-Active Cab Suspension System Delivers Such a Smooth Ride
The suspension line assesses environmental information transmitted from accelerometers mounted on opposite sides of the cab to the ECU. Each individual accelerometer constantly measures its acceleration at the top of the suspension.

The system’s ECU takes information from both the accelerometers and position sensors and automatically sets each shock absorber to optimize ride comfort. At the same time, the ECU uses the data to fill or exhaust air from the system’s air springs as needed.

Regulatory signals are output from the ECU to the shocks and air valves in real time. Dampening adjustments occur hundreds of times each second, and the resulting dynamic dampening state delivers a ride that is optimized for each instant.

Shock absorbers using magnetorheological technology employ voltage from the ECU that causes fluid in the shock to quickly become more or less viscous, making the shock stiffer or softer as needed. Shocks using hydraulic technology employ an orifice that rapidly adjusts its size to adjust the flow of hydraulic fluid in response to the activity of the frame rails. Both systems operate using no more than 10 watts of power.

Both magnetorheological and hydraulic shocks provide a ride that is immediately responsive to changing conditions. The system configures a very soft shock for smooth highways, and a very stiff shock for uneven or off-road conditions, and reconfigures itself for everything in between. It also features electronic height control and minimizes air consumption when compared to traditional height control valves. It does not fill or exhaust air in response to the system’s dynamic suspension motion.

Link’s Road Optimization Intelligence (ROI) Will Benefit OEMs, Fleets, And Owner-Operators.
The Benefits for OEMs
Many OEMs have designed private test tracks and use them, in part, to fine-tune cab suspension performance. Using accelerometers attached to both the frame rails and on top of the cab seat, suspension system adjustments are made to meet the demands they deem most critical, including operation under a full load.

ISO 2631-1:1997 standards enable OEMs to calculate a unique “ride number” for each vehicle, providing a method of comparison from one vehicle to the next. The standard originated as a byproduct of NASA experiments that measured the physical effects of human exposure to mechanical vibration and shock. Since its inception, the ride number has become the recognized industry standard. The ride number can also be used to extrapolate how many hours an operator can be exposed to certain dynamic forces, before internal injury may occur.

The Peterbilt 579 is known for its outstanding ride quality and happens to come with the Link Cabmate Cab Air Suspension System as standard equipment. In order to perform a side-by-side comparison, Link purchased a 2016 Peterbilt 579 80-inch sleeper cab. With the 579, Link is able to observe the vehicle’s original ride features and compare them to the enhanced characteristics of its new semi-active cab suspension.

Data collected thus far suggest a dramatic improvement in all measurable ride quality metrics. The quantitative differences are best expressed by comparing the vehicle’s ride number with and without the advantage of the semi-active suspension.

The Benefits for Fleets
Maximizing asset productivity, longevity, and utility is always a paramount concern for those in the C-suite of today’s fleets, and Link’s suspension system has a positive impact on each. Drivers can operate vehicles at higher speeds and with less anxiety, even over rough terrain. Fleets can also expect vehicles to require lower maintenance costs and to ultimately last longer.

On the human side of the equation, fleets can expect better vehicle handling, reduced driver fatigue, and fewer shock-and vibration-related injuries. Driver productivity may also rise as swifter off-road runs are now possible. The improved work environment for operators may also translate into higher driver retention.

The Benefits for Owner-Operators
Independent drivers and owner-operators will experience a new level of ride quality and will appreciate less wear and tear on their personal asset. They will also benefit by paying less for the Cabmate system than they would for a high tech seat that does little to protect their overall cab. With the amount of time many owner-operators spend in their vehicles, a true quality of life dividend can be expected.