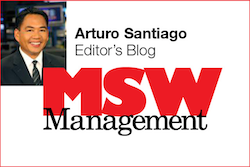 After I had just blogged about Waste Industry Safety, the Solid Waste Association of North America (SWANA) put out a press release titled, “SWANA Records 30 Solid Waste Worker Fatalities in 2019.”

According to the announcement, “An average of more than four worker fatalities have occurred each month this year through July 31st. Collection remains the deadliest aspect of the job, with 19 people killed. Of those deaths, 31 percent were single vehicle crashes and 26 percent were the result of a worker being struck by their own vehicle.”

SWANA also made aware its support of OSHA’s Safe & Sound Week which raises awareness of worker safety for all jobs and industries. “Fortunately, the solid waste industry is not alone in its fight to eradicate worker fatalities. The 3rd annual OSHA Safe + Sound Week brings together more than 1,800 participants and 220 partners, including SWANA, to help raise awareness about workers’ health and safety. We believe every workplace should have a safety and health program that includes management leadership, worker participation, and a systematic approach to finding and fixing hazards.”

Earlier this year, Group Editor John Trotti wrote a guest editorial for MSW Management about an accident involving a trash truck and an Amtrak train. Please make sure to check out the article, Trotti Files, Where Stops the Buck. His point is that management as well as the contracting agencies they serve should be ultimately responsible for waste industry safety.

Trotti writes, “To me the real issue has its roots farther up the food chain, first to the hauling company and then—and most particularly so—to the agency that let the contract; in both cases for their insufficient oversight of the waste collection and hauling operations.

The idea that a hauling company operating Class 8 trucks does not know the requirements of federal regulations at 49 CFR Parts 40 and 382 regarding use of controlled substances as well as random testing protocols seems pretty far-fetched. While the absence of regularly established safety meetings and lack of written policies and procedures for hiring and training employees are not actionable offenses, they would seem to contravene good sense.

But as for the contracting agency, the same cannot be said. The responsibility for public health and safety on its part is absolute and it is not enough to suggest that the ball is in someone else’s court with the mere stroke of a pen. Oversight is the mandatory first step in carrying out that responsibility and while today’s legal and employee union realities may limit truly effective actions on their part, public agencies must remain engaged in the performance of all of their own and their contractors’ activities…most especially those in which safety is a factor.”

Working in the waste industry is the fifth most dangerous job in the US.