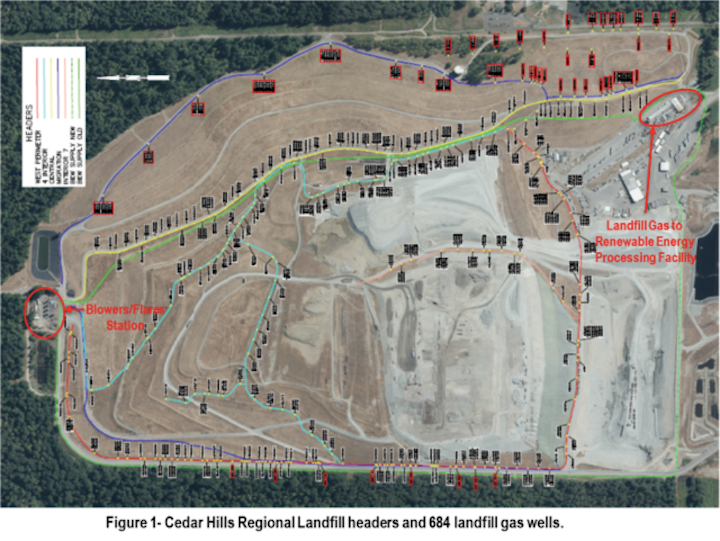 All moving motors have a distinct noise when operating normally. When a motor’s signature noise begins to change, malfunction should be anticipated, and if this noise is ignored the motor will most definitely cease, cataclysmically.

Astute landfill operators are often intimately familiar with the sounds of landfill gas (LFG) collection and conveyance systems as a heuristic knowledge to safeguard against system breakdown, but noises are subjective and difficult to communicate with other key operators for preventative operation and maintenance (O&M) work. However, the digital world has changed all this. Noises can be recorded digitally, and digital recordings can be converted and displayed objectively as sound waves with measurable wavelengths and amplitudes. This can change the O&M diagnostic and trend analysis for durable and reliable operation of LFG collection and conveyance system.

This article presents the sound signatures of the LFG collection and conveyance system for Cedar Hills Regional Landfill (CHRLF) located in Maple Valley, WA, one of the largest LFG-to-renewable-energy facilities in the US. Over 95 miles of perforated and solid pipes have been trenched and tunneled through nearly 60 million cubic yards of refuse to supply a steady stream of almost 10,000 standard cubic feet per minute (scfm) of LFG to the energy processing facility at CHRLF (Figure 1). Approximately 90% of this LFG is converted to renewable energy (natural gas and electricity) and the remaining 10% of LFG is flared during power outages or planned O&M shutdowns. To reduce greenhouse gas emissions against the global warming effect and recover methane as a natural resource, flaring of LFG should be minimized through continuous improvement in LFG O&M. Sound is a pure manifestation of energy transformation. The sound signatures of LFG collection and conveyance system can be used as O&M diagnostics to predict and prevent sudden blower malfunctions, excessive pipe frictional losses, and most importantly the frequent condensate blockages of LFG horizontal and vertical wells.

To establish that sounds have a unique signature, four people of mixed age, gender, and national origin were asked to read the same sentence at their own pace, while their voices were digitally recorded using an iPhone recording application. Utilizing Ocenaudio editor, the recorded voices were then displayed as sound waves and compared to one another. As presented in Figure 2, all four recordings look similar to one another since each word has its unique pattern of wavelength and amplitude separated by pauses of little to no amplitude or wavelength. Together, these recordings of wavelengths and amplitudes create a recognizable sound signature for any dynamic or mechanical systems that generate noise. 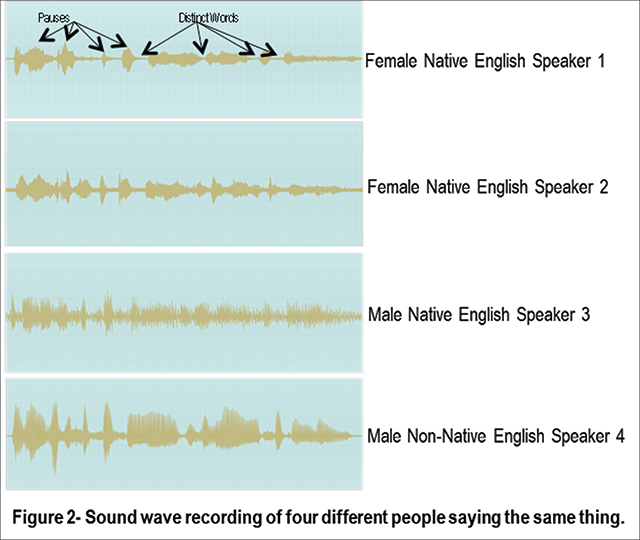 Blowers are the engine of the LFG collection and conveyance system; the sound signature of blowers was recorded, using a nearby 24-inch diameter high-density polyethylene (HDPE) aboveground main header. To record the sound signature of blowers in the main header, the Fluid Conservation System (FCS) S30 was utilized in conjunction with an iPhone recording application (Figure 3). The FCS S30 is a leak noise amplification system frequently used for buried pipe leak detection by wastewater and water municipalities. Due to noise amplification capabilities of the FCS S30, recordings of aboveground exposed pipeline in this study were made when no other heavy equipment or noise sources were in the vicinity of the recording area to interfere with the amplified sound of blowers inside the LFG flowing pipe. 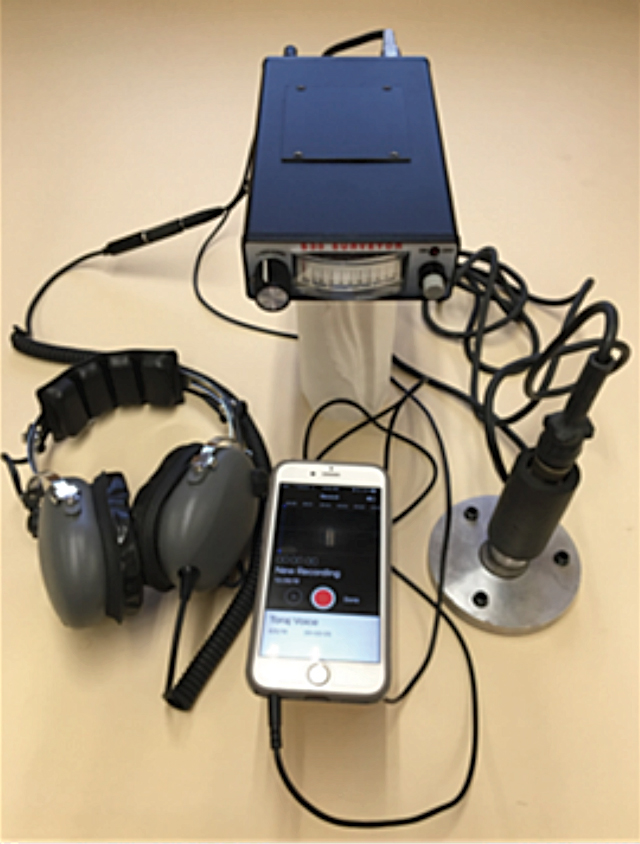 The sound signature of blowers was studied at different times on different days to examine if there was a significant variation in sound signatures while the blowers were operating under the same condition, with approximately 40 inches of water column vacuum and 10,000 scfm of LFG flow.

As shown in Figure 4, the blower sound patterns have a similar signature with the continuous presence of high amplitudes and densely connected wavelengths. Since blowers are the most mission-critical component of LFG collection and conveyance system, blower malfunction is a rare occurrence due to intensive monitoring of power surge protection and vibration sensors. However, historical recordings of blower sound signatures can be used as an additional tool to diagnose and prevent blower malfunction based on observation of any aberration in blower operation that would manifest itself in a noise change, or sound signatures.

At CHRLF, LFG sub-headers are typically 12 to 16 inches in diameter aboveground HDPE pipe while LFG horizontal and vertical wells are typically 6-inch-diameter perforated HDPE pipe inside the refuse and then are reduced to 2-inch or 4-inch diameter aboveground solid HDPE pipe. Due to condensate and leachate evaporation, the interior surface areas of subheaders and LFG wells are often covered with layers of scale (Figure 5), increasing the pipe frictional losses. These frictional losses will eventually add more loads to blowers and reduce the LFG vacuum radius of influence inside the refuse. A comparative study of historical sound recordings of LFG flow inside sub-headers and LFG wells can be a diagnostic tool to identify increases in pipe frictional losses; the higher the frictional losses, the higher the sound amplitudes and wavelengths. Typical sound signatures of LFG flow inside sub-header and wells are shown in Figure 6. 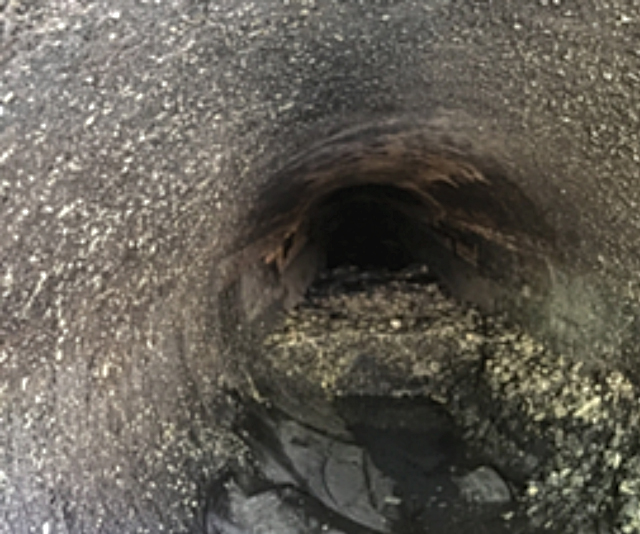 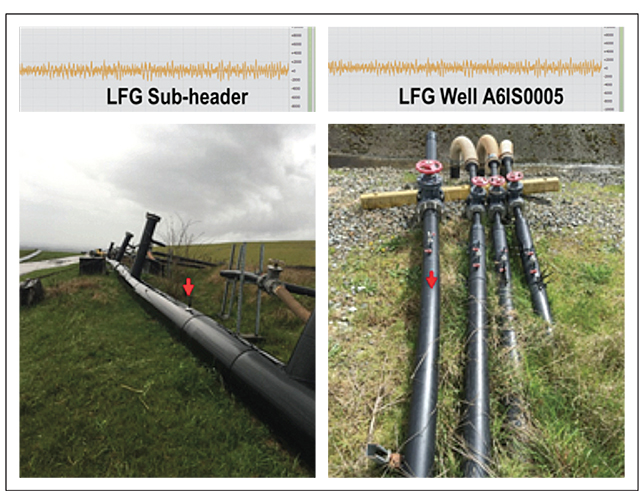 Finally, the best application of a sound signature is in preventing the nefarious water (condensate/leachate/precipitation) blocks inside LFG wells, a common quandary in municipal landfill industry. During the lifetime of an LFG well (typically a decade or two), some of the wells are either partially or completely shut down due to water blocks. Even though these water blocks are mostly associated with old LFG wells in areas of diminished methane concentrations, the intermittent operation of water-blocked wells requires excessive field adjustment for proper vacuum distribution to areas of high methane concentrations. The root cause of water blocks in LFG collection and conveyance systems may emanate from several sources, including the abundance of rainfall that passes through the permeable refuse disposal areas. The percolated precipitation through refuse can find its way through LFG wells and eventually block the pipe perforations and puddle water inside the LFG wells. Another source of water blockage is due to the landfill’s differential settlement that can bend, pinch, or even collapse an LFG well. However, arguably the biggest factor for water blocks inside LFG wells is perhaps the misunderstanding of the science behind the primary cause of most water blocks. 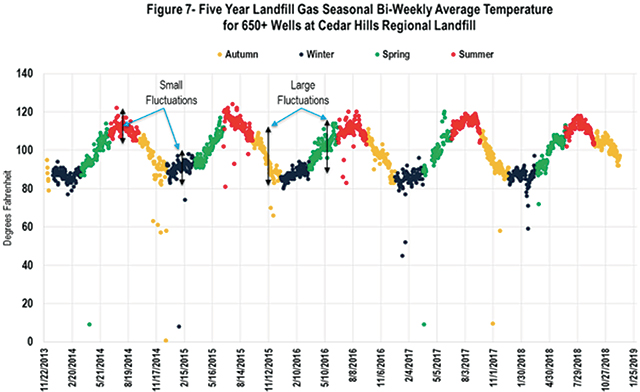 Most landfill engineers reference the thermodynamic properties of LFG, naming the ambient cooling effect, as the primary reason for the phase change to drop moisture from gaseous phase to liquid phase inside the LFG collection and conveyance pipe, but this is not entirely true. Microbes inside the refuse behave similarly to the more-than-40-trillion microbes that reside inside human intestines; they thrive and proliferate best at the human body temperature of around 98°F. Based on five-year biweekly average temperature monitoring data of over 650 LFG wells at CHRLF, the seasonal LFG temperature fluctuations can vary +/- 20°F. As presented in Figure 7, the LFG temperature fluctuations for winter and summer are similarly small and for autumn and spring are similarly large (the scattered spurious data in Figure 7 are due to construction and/or O&M work). If temperature fluctuations were the driving force for moisture drop, then there must be evidence for a seasonal variation in water blockage of LFG wells, most notably during autumn and spring with the most swing in LFG temperature and that is not the case for the CHRLF.

Furthermore, according to psychometric charts, the maximum moisture content of ambient air at 100°F and 100% relative humidity is approximately 2.9 pounds of water vapor per 1,000 cubic feet of dry air, or approximately 5,000 gallons of moisture per day (gpd) assuming an airflow rate processing of 10,000 scfm. As compared to air, according to the US Environmental Protection Agency study of Municipal Landfill Gas Condensate by Jeffrey Briggs, the upper range of condensate rate in LFG is estimated to be 17,500 gpd for wet regions of the US, like CHRLF. That is much higher than the maximum moisture content of the air. Therefore, the seasonal fluctuation in temperature alone could not explain the volume and magnitude of pervasive water blocks inside LFG wells at CHRLF year-round.

The primary factor in dropping moisture in an LFG pipe is due to impact velocity, similar in process to that of dust particulates dropping in cyclones, considered in air pollution engineering. When fast-moving water vapors change direction due to pipe bends, elbows, tees, or scales, the floating water vapors collide with the pipe wall, dropping and puddling water inside the pipe. The puddled water reduces the cross-sectional flow, which in return increases the LFG flow velocity. The increase in LFG flow velocity causes more dropping of water vapors, more puddles, and more pipe restriction, and the “vicious cycle” continues until the LFG pipe is completely water blocked.

Once an LFG well is blocked inside a massive pile of refuse, there is not much that can be done other than turning off the LFG well until the water blocks have evaporated or diminished with time. The landfill’s differential settlement can exacerbate the water block problem due to pipe inaccessibility. In some locations, water blocks at CHRLF are more than 1,000 linear feet inside the refuse. The depth can be an impediment for video inspection. The FCS S30 can magnify the back-and-forth slushing sounds of water puddles in the pipe regardless of puddle location inside the landfill. 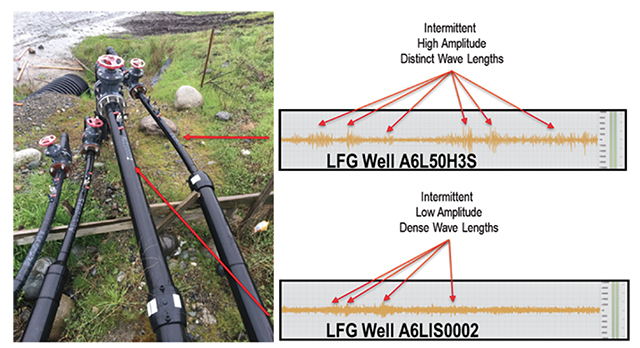 The monitoring sound signatures of LFG wells may help prevent water blockages at its nascent stage of development. Using monitored recordings of sound signatures with the earliest evidence of water surge inside an LFG well, the controlling valve on the well should be throttled down to minimize LFG flow (approximately 5 scfm). At low LFG flow conditions, the rate of water evaporation is greater than water accumulation, allowing for water blocks to be diminished. The flow reduction in an LFG well can be adjusted based on sound amplitudes and wavelengths; the lower the water blocks, the lower the amplitude and less frequent the wavelengths.

While FCS S30 is an effective sound amplifier, it can be cost-prohibitive, and it lacks recording capabilities and sound editing software. With emerging technologies, affordable and more sensitive sound recording and editing software may soon be available to help to improve the O&M quagmire associated with mechanical malfunctions of mission-critical components such as blowers, frictional losses, and water blocks of an LFG collection and conveyance system.