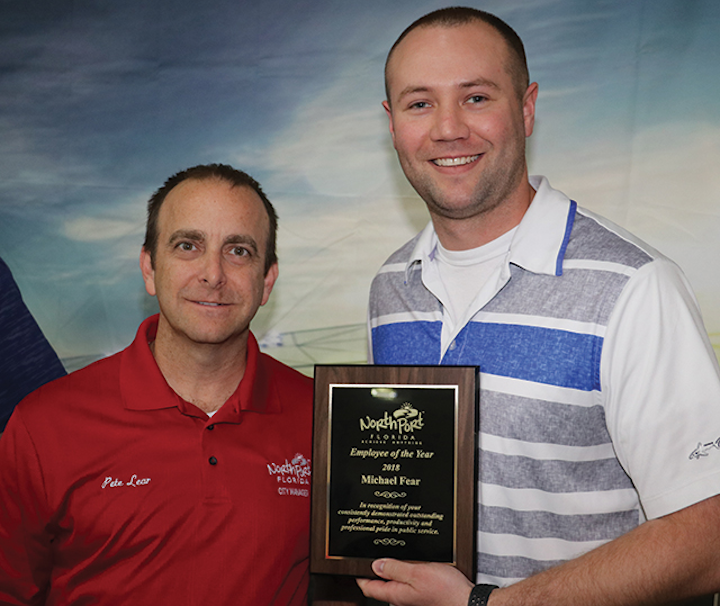 IT’S NOT EVERY day a YouTube video of solid waste workers goes viral. But when they are wearing Santa Claus hats, dancing in front of collection trucks, and lip-syncing to “All I Want for Christmas,” that’s bound to attract attention. (www.youtube.com/watch?v=ptGYjEJuBPo) Michael Fear—customer service coordinator for the North Port, FL, public works department of which solid waste is a division—is keen on education and communication approaches relevant to today’s information consumer. “To raise awareness effectively, we must tell our story where people are spending their time,” says Fear. “We use social media because that’s where the eyeballs of our residents are.” According to Statista, 79% of the US population has a social networking profile. The lip-sync video focuses on showing appreciation to residents for doing their part to manage their solid waste. “It humanizes our division and shows residents our employees are normal people who love their job. It’s also good for department morale and for the city as a whole,” says Fear. “When a video is shared nationwide, it brings a sense of pride to the city.” Prior to its social media campaign on Facebook, YouTube, and Twitter, the Solid Waste Division relied heavily on direct mailers, press releases, and website postings. The city’s Solid Waste Division launched its proactive awareness campaign in 2015, two years before launching a new city-wide recycling program implementing a change in the dual-stream recycling service from blue bins to an automated collection of two recycling totes—one for paper products and one for co-mingled glass, plastic, and cans with collections rotating between the two each week. The goal: to increase recycling rates, driver safety, and efficiency. The holiday video has attracted global comments and three awards, including a 2017 SWANA Silver award in Communication, Education, and Marketing excellence. “It was such an overwhelming success, people would ask the guys on the route when their next video was coming out,” says Fear. “We’ve been doing it every year since and our community loves it.” The social media campaign’s success is measured not only through increased social media engagement, but in the uptick of recycling. The city’s Facebook page has 18,000 followers and its Twitter feed has 3,400 followers. Of the city’s 70,000 residents—some of whom are children too young for computers—Fear considers that a good reach. Social media efforts augment community events and school visits. “Social media is free,” notes Fear. “An expensive, large production crew is not necessary. Our first viral video was filmed on an iPhone.”

WHAT HE DOES DAY TO DAY
Fear balances his time among the tasks of helping to manage the city’s website, create social media posts, provide customer service, and handle media requests. Residents’ inquiries and correcting misunderstandings posted on social media take precedence.

WHAT LED HIM TO THIS LINE OF WORK
Fear earned a Bachelor of Arts degree in business management from Morehead University. He embraced social media as an effective form of marketing years ago. “I like creating content that helps people,” he says.

WHAT HE LIKES BEST ABOUT HIS WORK
“We’ve got a great group of men and women I like working with,” says Fear. “Our leadership both in solid waste and the department as a whole is very open to any of these creative projects and it’s worked. Not every place would be so open to this. When you’re doing a lip-sync video with solid waste collection workers, that’s not exactly the norm.”

HIS BIGGEST CHALLENGE
Recycling changes present the biggest challenges, notes Fear. In North Port, that has meant moving from a message of “recycling” to “recycling right.” “If you’re talking about plastics #1 to #7 except for #6, that’s specific detail when you’re trying to educate or create social media content,” he says. Addressing wishcycling is another challenge. “There are so many different layers to recycling,” says Fear. “My advice to that challenge is to go to a ton of events, talk to people one-on-one as much as you can, and put a ton of content online. Instead of worrying about getting the perfect video to answer all of those questions, create four videos and answer one question at a time. Keep the message simple.”