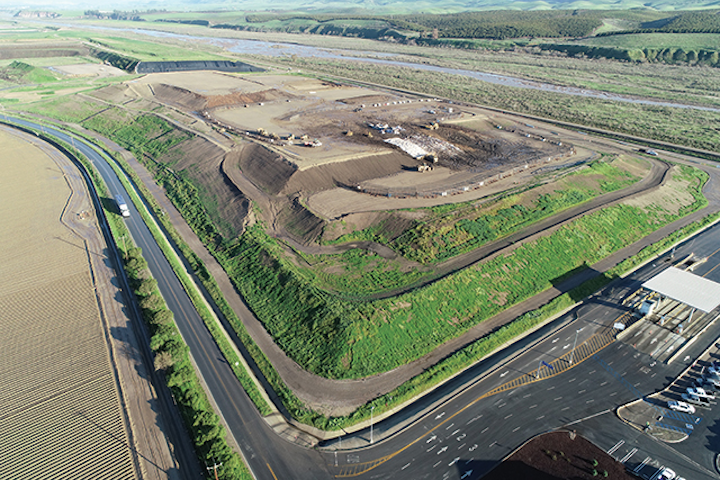 An aerial photo shot using a drone
All photos: Trimble

What started as a faster, more accurate way to determine real-time compaction, volumes, and remaining airspace has since become an integral part of operations and regulatory activities as the Utilities Department readies to close one landfill and open a new site that is twice the size of the current site.

Compaction Control
The 290-acre Santa Maria Regional Landfill provides solid waste disposal services to northern Santa Barbara and southern San Luis Obispo counties. Cell 1 is the active area of the landfill, which is the primary location for waste placement; nearby stockpiles of soil from the riverbed provide for cover when a lift reaches its final elevation, and the site also operates a recycling center to divert waste from the active area.

The primary goal of any landfill management agency is achieving high waste compaction densities in the safest, most efficient, and environmentally-sound approach, as well as performing all monitoring and reporting activities in accordance with applicable laws and regulations.

These are all activities that an Unmanned Aerial System (UAS) equipped with the right sensors can support. Until recently, leadership in the Utilities Department relied on a third party to conduct an aerial survey of the landfill once or twice a year and provide updated topographic maps. The rest of the time, the landfill team calculated volumes by walking or driving the landfill grounds and conducted field surveys with a GPS rover.

That all changed in 2018 when the City purchased its first UAS, more commonly known as a drone system, and assigned Trent Girouard, Engineer I, as lead UAS operator for the Utilities Department.

“The UAS is a powerful resource for the department, allowing staff to monitor landfill compaction performance in near real-time,” says Herb Cantu, Solid Waste Manager for the landfill. “The UAS enables the landfill team to take corrective action measures swiftly rather than receiving data six months later and not being able to take timely corrective measures.”

In addition to the benefits of being able to monitor compaction performance and take corrective action quickly, Cantu anticipates that the system will also provide a boost to the department’s revenue.

“Based on the improved compaction realized through the utilization of the UAS, it is estimated that the Utilities Department can generate an additional $4 million in revenue for the remainder of the site’s available capacity, which is estimated to be around 2025,” he says. “While the UAS is primarily utilized for monitoring ongoing operations, it will also be a great asset for construction projects.”

The Utilities Department selected the Trimble Stratus 3D cloud-based visualization platform with a DJI Phantom 4 RTK drone for its integrated PPK workflow. Trimble Stratus allows for measurements to be made inside the portal and can also provide outputs in geodetic, projected, or local coordinate systems, for use in Trimble Business Center and CAD software. The group also opted for Propeller AeroPoints, solar-powered ground control points with embedded GPS receivers that serve as a base station for the PPK drone and checkpoints to provide independent validation and confidence in the accuracy of each flight.

The first flight of the new drone system was in December of 2018. 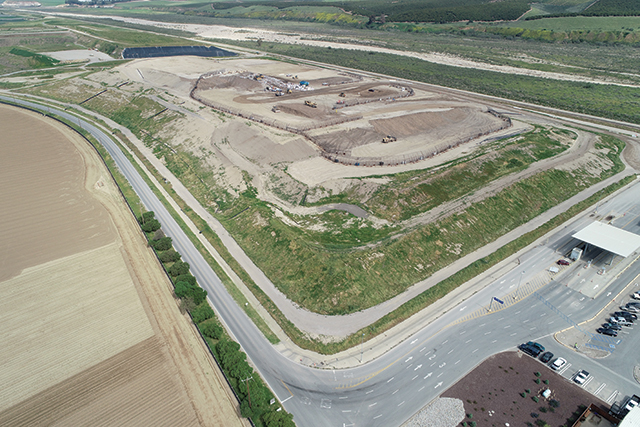 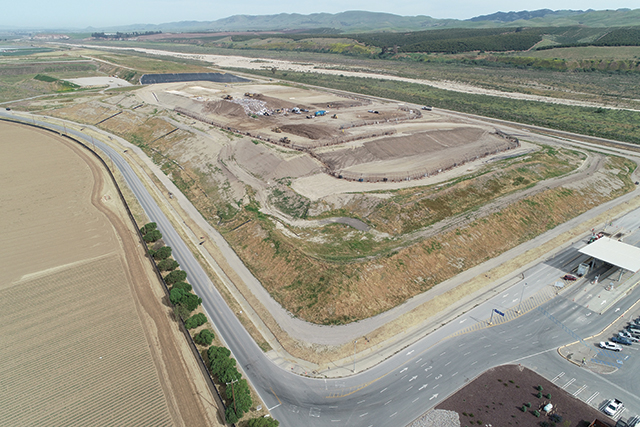 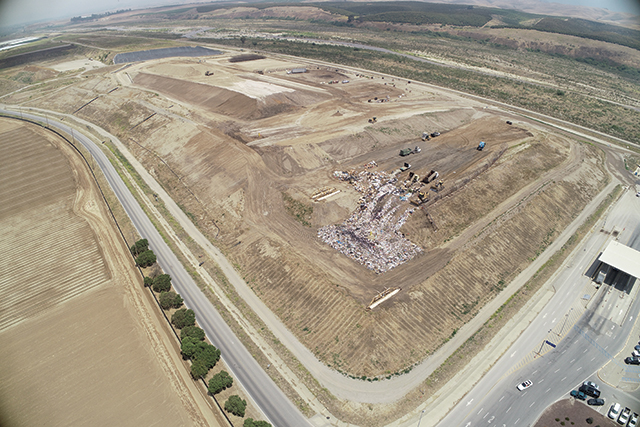 Setting a Clear Flight Path
Before every flight, Girouard prepares a flight plan to meet mission objectives using the drone software. The plan includes horizontal coordinates as well as elevation.

“We have several flight plans developed and stored in the system,” he said. “The most frequent use of the drone system is to fly the 36-acre Cell No. 1, Cell No. 2, and the concrete/asphalt recycling area (a total of 114 acres) to capture current compaction rates and stockpile volumes. All I have to do is place the AeroPoints marker and turn it on, send the flight plan to the drone from my controller, place the drone on the AeroPoint marker, tap “go,” and it takes off to autonomously complete the mission.”

Because of the size of the area, the drone must return to the landing spot about halfway through the flight plan to get a new battery. “It takes about 40 minutes to fly the route. Once it lands, the AeroPoints software looks for a Wi-Fi connection, in this case to a smartphone, to upload its GPS data to Trimble Stratus,” says Girouard.

After the flight, Girouard pulls the survey data from the drone’s SD card, which totals on average about 550 images for the Cell No. 1 flight plan, and clears the memory. He uploads the images to the Trimble Stratus software, including their measurement of the control point’s location, which will be used to translate the AeroPoints data to their local coordinate system. He adds, “Often, I’ll get the 3D topographic model and an orthophoto (the compiled 550 images) in our coordinates that same day, but always within 24 hours.”

He then pulls the model up in Trimble Stratus for analysis. “My most frequent use of the platform is its comparison functionality, where I compare the new model with the previous week’s model to determine the volume filled between flights. I then compare that to the buried tonnage from the scale house to obtain our compaction rate.”

The ROI of the drone-gathered data is seen every day, according to Girouard, in the way of efficiency and accuracy, which is particularly important as Cell No. 1 draws closer to its end of life.

“The real value of the UAS is accuracy,” he says. “Our compaction numbers are far more precise than previous estimates generated from ground-based surveys. Also, we are far more equipped to take corrective action when necessary. For instance, under our permit, we can’t exceed a fill height of 410 feet mean sea level, and we have to leave sufficient space around exterior slopes for the final cover, so if I see any anomalies in the topos, then our landfill staff can remediate as needed.” 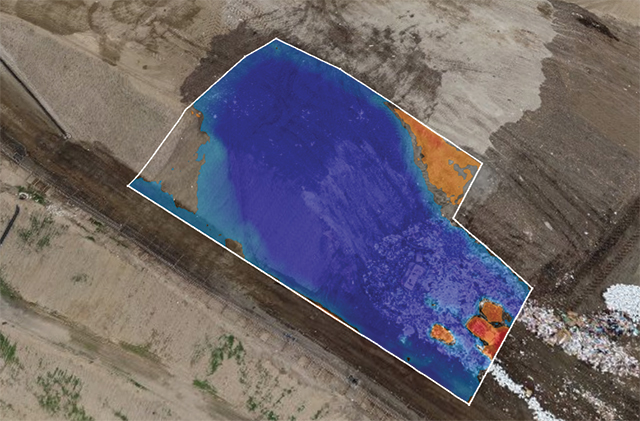 Timely Reporting
Landfills are highly regulated by local, state, and federal agencies with strict reporting requirements, and the Utilities Department is also realizing improvements in meeting those requirements as the result of its technology investment.

The California Department of Resources Recycling and Recovery (CalRecycle), a department within the California Environmental Protection Agency, is the primary authority that administers and provides oversight for all of California’s state-managed nonhazardous waste handling and recycling programs. The Utilities Department has found the drone-enabled data gathering to be ideal for creating timely and repeatable topographic maps for reporting purposes.

“If our regulatory compliance specialist needs an airspace number, it’s easy to go in Trimble Stratus and pull that number,” says Girouard. “The drone data has taken a lot of the stress off of our people when it comes to reporting.”

Accurate reporting is also essential for long-term planning and to forecast future landfill capital projects, which is often determined based on remaining airspace figures—a value that Girouard can provide in near real-time.

The data is also invaluable for specialized reporting requirements. CalRecycle requires the Utilities Department to report annually its remaining site capacity. Girouard was able to perform this task efficiently by comparing two separate design surfaces and determine the remaining airspace and volume consumed. “I imported the two surfaces into Trimble Stratus and prepared the map within minutes. It’s just that simple.”

New Fly Zone
The drone system is an integral part of the City’s construction efforts at the current site and the new site currently under development.

In one instance, Girouard used the drone data to help operators develop a “fill” plan for an open area in Cell 1 that they wanted to fill. “I moved the map data for that area into design software and calculated estimated volume to fill the opening, and then provided that file to our landfill operators to complete their fill plan design,” he said. “The timely data helped ensure they had very accurate information to determine the size of the area, estimated waste-to-fill, and projected completion date.”

The drone system will also play a significant role in the City’s River Mining Project in August of 2019, where approximately 100,000 yards of sediment will be removed from the Santa Maria Riverbed and stockpiled at the landfill to be utilized for cover upon closure. This project benefits the City as well as local farmers and neighboring jurisdictions due to enhanced ability to recharge the groundwater aquifer through the removal of the riverbed sediment. The drone has been utilized to create a baseline topographic map of the construction area and will also be utilized to track soil quantities. Provided that the construction area will be approximately 1 mile long by 300 yards wide, Girouard will be able to efficiently and accurately obtain those quantities.

The greatest use of the drone system in a construction capacity will be in support of the new 617-acre Santa Maria Integrated Waste Management Facility (IWMF) at Los Flores Ranch Park (Los Flores), which will eventually replace the existing 290-acre Santa Maria Regional Landfill. The proposed project involves the construction and operation of a modern Class III lined landfill on a 1,774-acre site with approximately 90 years of capacity. Engineers will be designing the new landfill operations areas, landfill gas collection wells and landfill gas monitoring probes, groundwater monitoring wells, access roads, buildings, and other infrastructure that must be approved by several regulatory agencies, including but not limited to CalRecycle, Regional Water Quality Control Board, Air Pollution Control District, Department of Fish and Wildlife, and the Division of Oil, Gas, and Geothermal Resources.

Girouard has already flown the new site to gather topographic data that was provided to the engineering consultant to support conceptual design efforts. He notes, “We’ve been working very closely with the engineers designing the site. The maps we provide are about 3-centimeter accuracy. In fact, they’ve laughingly told us that the contours are almost too accurate.”

The design and construction road ahead is a long one, and those charged with designing the site will likely look to Girouard and his drone system multiple times to facilitate their activities.

Once opened, the Utilities Department will be charged with monitoring the much larger landfill boundaries and cells—a task that would have been done by truck or on foot in the past.

“Los Flores is very hilly, and it will take a while for roads to be established. During that time, the UAS will be the only option we have to gain a complete visual of this much larger site during construction and operations,” says Girouard. “No doubt, the drone system will become an essential tool for site management, reporting accuracy and timeliness, funding, and safe operations for our team onsite.”