Routing software and asset management that can increase efficiency and productivity 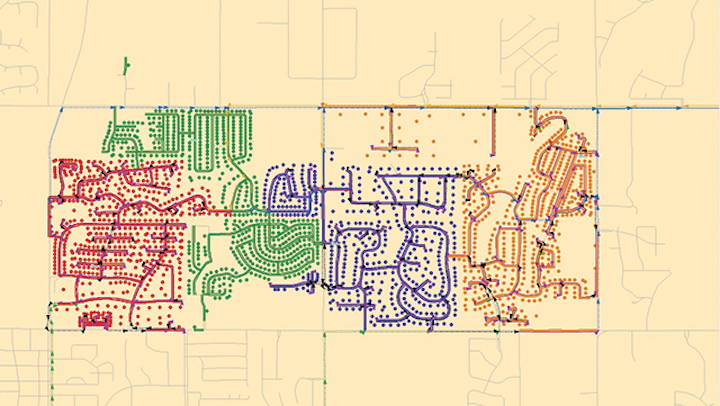 The Villages retirement community in Florida is the nation’s fastest-growing metropolitan area. That means that about twice a year, the solid waste routes need to be changed to accommodate the growth, notes Tony Esposito, C2Logix president.

His company’s route optimization is used there and in other places nationwide to help solid waste efforts derive its inherent positive benefits.

“They were running 13 trucks and when we did the optimization, they were down to 10,” says Esposito of The Villages.

Routing software and asset management continue to change the nature of how solid waste is collected.

“For example, Appian from Trimble MAPS is a software that’s focused on matching the right equipment and driver with the right stops and getting them completed as optimally as possible,” he says.

Solutions such as those offered by Trimble are web-based or desktop and designed to be easily installed, says Larwig.

“They can be integrated to any other systems to achieve maximum efficiency for users, which can offer later benefits,” he adds. “The software is backed by intuitive transportation-focused algorithms with a friendly user interface based around the user’s workflow.”

Routes can vary in the waste industry, Esposito points out. High-density routing can cover nearly every residence in a city whereas commercial pickup may not require stops at every building.

“You log on, load up all of your stops and put in all of the different parameters,” says Esposito. Parameters could include container weight and cubic volume.

“The program can figure out when the truck is going to be full and make sure it’s not creating routes it can’t get to because it’s already full,” he says.

Instead, a route is created as the truck works its way into and out of the dump with the least possible amount of deadhead.

For high-density routes, FleetRoute is a program that sits atop Esri’s ArcGIS and is used to establish parameters and create routes in municipalities that are GIS-mapped.

Esposito says end-users have told him it costs a quarter-million dollars a year to keep a solid waste truck on the road.

For an ROI on C2Logix systems, end-users can derive a minimum of 15% savings from eliminating downtime, says Esposito.

The FleetLink suite of applications is designed to cover fleet tracking, route management, reporting, and safety, including driver scoring and video playback.

“Each of these applications leverages a common database that is populated with service verification data, sensor data, and camera footage delivered in real-time by vehicles in the field,” says Trueman.

The FleetLink solution is typically hosted in the cloud unless the end-user prefers to self-host the solution, says Trueman. 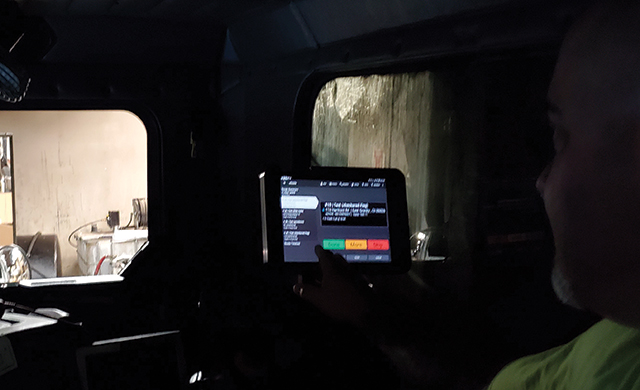 FleetLink was designed for a range of users including dispatchers, operations supervisors, and safety managers who use the solution for different reasons at different times of the day.

Core Computing Solutions specializes in operational and financial software—EnCORE—that is tailored for the solid waste and recycling industry to provide both routing and asset management.

The software incorporates a back-office system and also manages accounts receivable and billing.

For routing, a service or route assigned to a driver is sent to the Android tablet in the truck cab. Once the services are dispatched out, a map shows the truck’s location.

For asset management, “we optimize the container inventory—what can is onsite and what is being pulled from the yard and going out to a particular site,” says Scott Fisher, Core Computing’s national sales director. “It’s a live inventory for containers, whether it be commercial, residential, or roll-off.”

As the driver executes the route, the tablet is recording all of the events from the time the job is started until the driver gets to the first job site.

The system offers route productivity data that generates a profit and loss report for routes and work orders.

Because the system also incorporates accounts receivable, drivers can capture a picture of extra solid waste found on the route, which will generate a charge batch that is reviewed before it’s sent to the customer’s account, something that Fisher points out illustrates the return on investment.

Fisher estimates there to be a 60-day period from the time a waste operation signs up for EnCORE to going live, which includes system configuration and data conversion training.

Through polygon mapping, haulers can draw out service areas and the rates and pricing associated with those service areas, a helpful tool when considering taking on a new customer, says Fisher.

AMCS Platform is a software solution for the waste and recycling industry designed as an end-to-end enterprise-grade SaaS solution encompassing customer onboarding through billing and invoicing.

It is capable of managing vehicle asset availability as well as work orders and services assigned to those assets, along with proof of service to manage service level agreements with customers.

Because it is a fully cloud-based SaaS solution utilizing the Microsoft Azure environment, installation, upgrades, and maintenance all come together in a streamlined process, he adds.

To help onboard new users, Platform has more than 4,000 best-practice processes designed into the system to ensure intuitive and streamlined navigation, even for inexperienced routing solutions users, says Monroe.

The company’s routing solutions have enabled average improvements of up to 25% reduction of vehicles used and driver shifts, up to 30% overall reduction in mileage and CO2 emissions, and up to 90% reduction in internal planning time needed to create and maintain master routes, notes Monroe.

Other market options include DT Systems’ Sonitrax Online. It’s a hand-held scanning device featuring a one part-ticket with an encrypted barcode.

The RFID tag on the truck gives feedback to the scanner, which ensures it is the right truck.

“You don’t have to touch anything,” says Nicoterra. “It stays about six inches away and you can just wave it. It gives a tactile vibration in the hand and lets you know you’ve received it. You scan the ticket the same way with the barcode on it and that vibrates as well. There’s so much noise at the truck that you need to have that type of tactile feedback.”

“There is no set formula, but it generally includes the cost of the vehicle, fuel, insurance, and the driver divided by the miles driven over a month,” he says. “Understanding this is required to determine the ROI and internally sell the implementation of a route optimization application. If the savings in miles driven does not exceed the fixed cost of the application and the cost of the labor to administer it, route optimization is not a smart investment.”

Iler favors abandoning the idea that routes are static and tied to a specific vehicle.

“It is very costly to keep a customer on a particular route for the sake of customer service when it may be more efficient to move the customer to a different route,” he says. “Some customers are more sensitive to this, but in the long run, if a customer represents a 5% profit margin instead of a 50% margin, it is not cost-effective to keep the customer.

Samsara, an IoT company, provides another option for waste haulers through its sensors that enable end-users to connect real-time data about machines, trucks, and other assets used in daily operations to the cloud for full real-time visibility, notes Sarah Loaiza, product marketing manager.

Routing and dispatching tools allow the end-user to set up a route and track it in real-time as well as compare its performance against expectations, says Loaiza.

“That gives real-time analytics aggregated in a simple, easy-to-use data dashboard. You can see where you need to make adjustments in your business to provide better customer service, route the drivers more efficiently, or have a conversation with a stop that’s not going very well and understand what the issue is.”

It is designed to be as user-friendly as a phone app, says Loaiza. Hardware installation depends on a vehicle’s gateway setup. The system’s ROI depends on how the product is being used, Loaiza points out, adding that some end-users have reported an ROI in fuel costs through a 10% reduction in idle time.